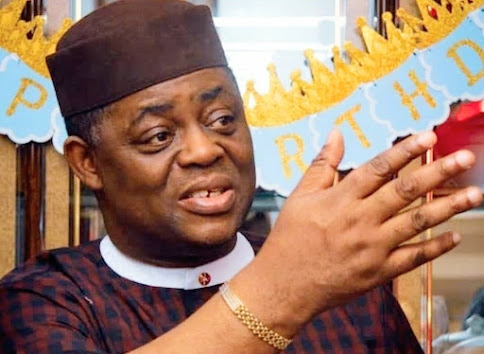 A chieftain of the All Progressives Congress, APC, Femi Fani-Kayode, has mocked a former Kogi West Senator, Dino Melaye over his gaffe in Maiduguri, Borno State.

Addressing a presidential rally in Maiduguri, yesterday, Melaye mistakenly urged them to vote for the APC.

Melaye spoke while alleging that the APC presidential campaign team was attacked while enroute the State.

Reports had it that some unknown gunmen allegedly attacked Atiku’s convoy in Maiduguri.

He said: “46 cars have been damaged, and I just got a report that 70 people are in the hospital, but the people of Borno have decided that they are throwing away the broom and going with the umbrella; you are voting APC everywhere.”

Reacting to the gaffe, Fani-Kayode said the spokesman of the PDP presidential candidate, Atiku Abubakar campaign was right.

In a tweet, Fani-Kayode wrote: “Earlier today, the rear guard receiver said the people of Borno State “are voting APC.

“For the first and probably the last time in his life, he got it right!”

Fani-Kayode and Melaye have been tackling each other on social media.