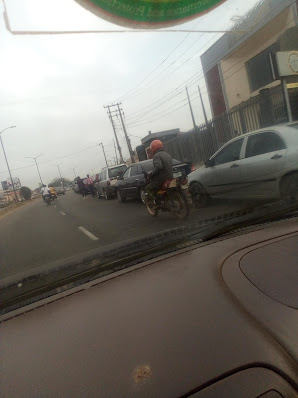 A lot of commuters plying the streets of Ibadan, the Oyo State capital were on Tuesday stranded due to fuel scarcity that the city is currently experiencing.

Saga Gist observed that long queues of commercial buses, cars and private vehicles have returned to the majority of the petroleum stations in Ibadan, the Oyo State capital, since three days ago.

There was tension on Tuesday due to the fact that the majority of the petroleum stations have shut their doors against customers.

Saga Gist observed that only one petroleum station is still selling fuel at the rate of N180 per litre while a few others hiked their pump price to N195 or more, even up to N250.

Predictably, the station selling at N180 was filled up.

Some Ibadan residents who spoke lamented that they waited for several hours to get the commodity.

Commuters also lamented that they spent several hours at bus stops before they get to their destinations.

A respondent, Ajibola, explained that he bought the commodity at the rate of N250 on Monday evening.

“It was terrible, I bought the fuel along the Ijebu-Ode Road on Monday at the rate of N250. And nobody is talking. So we are our activists. During the Jonathan period, in 2012, people came to the streets to protest, so where are the activists?” he lamented.

As of the time of filing this report, only a few petroleum stations are opened across the city.