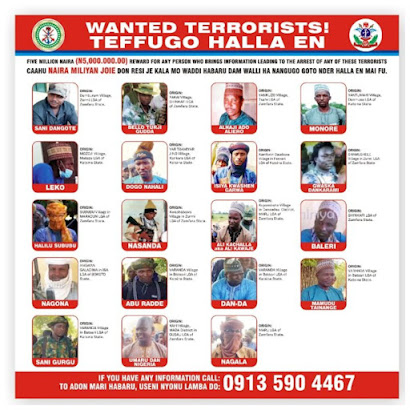 Maj. Gen. Jimmy Akpor, the Director of Defence Information, said a N5 million bounty had been placed on each of the wanted terrorists, NAN reports.

DHQ spokesman disclosed this on Monday in Abuja while displaying a poster containing the information of the wanted terrorists.

Those declared wanted have been terrorising Katsina, Sokoto and Zamfara states.

DHQ urged anyone with any information on the wanted terrorists to call 09135904467.

The wanted bandits and terrorists are named below:

Halilu Sububu from Sububu Village in Maradun LGA of Zamfara

Nagona – from Angwan Galadima in Isa LGA of Sokoto State

Ali Kachalla, aka Ali Kawaje, from Kuyambara Village in Dansadau Maru of Zamfara

Dan-Da from Varanda Village in Batsari LGA of Katsina;

Nagala from Maru LGA of Zamfara.