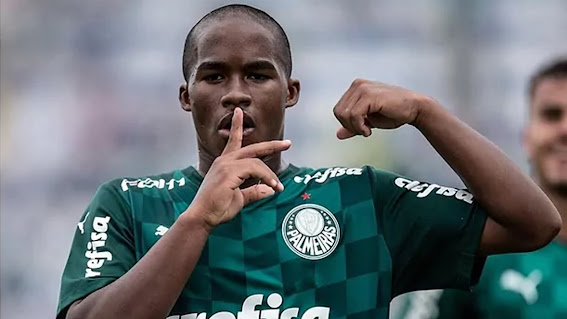 Brazilian youngster, Endrick, would prefer a move to Chelsea ahead of a host of other top European clubs as the Premier League giants prepare to meet his €60million release clause.

Endrick is one of the most sought-after talents in football, with Manchester City, Arsenal, Real Madrid, Paris Saint-Germain and Barcelona tracking his progress.

The 16-year-old forward will not be eligible to leave Brazilian club Palmeiras until he turns 18 in 2024.

But top clubs are already battling to secure his signature ahead of 2024.

According to ESPN Brasil, PSG tabled an opening offer of €45million for Endrick on Friday, but it was instantly rejected by Palmeiras.

The French Ligue 1 champions have signalled their intention to increase that offer to €60m, which Chelsea have also promised to meet.

The report added that Endrick’s current preference is to join Chelsea as he would like to play in the Premier League when he does leave his homeland in Brazil.

Chelsea are said to have ramped up their charm offensive to sign the teenager by inviting his family to the club’s Cobham training ground and enlisting the help of defender Thiago Silva to sell the project.

Endrick’s father, Douglas, recently dismissed suggestions that his son had already agreed to a move to Real Madrid.

“There’s nothing decided for Real Madrid or any other club. We have no preference yet,” Douglas said.