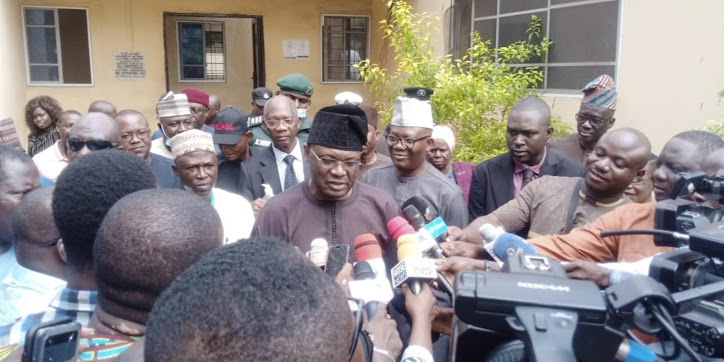 While addressing newsmen at the scene of the burnt INEC office in Abeokuta South Local Government, Yakubu said he was in Ogun to further assess the extent of damage done to the INEC facility.

He said the visit was also to meet his staff in the place they have relocated to in Oke-Ilewo, to boost their morale.

In his words, ”the INEC boss assured the people of Abeokuta South that none of them would be disenfranchised in the 2023 general elections, in spite of the attack.

He said the commission is putting efforts in top gear to replace all the materials lost to the inferno.

“We lost 65,699 PVCs, and we want to assure all those that have not collected their PVCs who may have been affected that we are making plans to reprint the PVCs quickly and to bring them back to Abeokuta South for people to collect and vote,” he said.

“We will not be deterred, we will not be cowed by any act of arson by undemocratic and retrogressive elements.”

He disclosed that the commission needs just two days to reprint the affected 65,000 voters cards.

“We have to get the Voter Identification Numbers (VIN) for the cards that were lost so that we can quickly reprint them.”

He described as disappointing, the fact that five INEC offices were attacked nationwide in the last four months.

“But this will never deter us, we will make sure that we replace burnt and destroyed equipment and also reprint the PVCs and conduct elections,” he said.