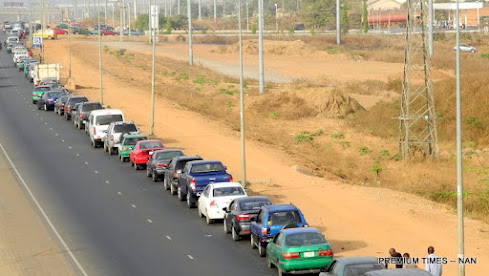 As fuel scarcity has continued unabated in Kaduna and its envrions, residents of the state have continued to pray for God’s intervention.

Some residents across the 23 local government areas of the state, who converged at Kudedan mountain on Saturday, said they are praying against continuous hardship and fuel scarcity which had hindered the businessmen and women from going to bush market and neighbouring states to buy foodstuff in wholesale and sell to consumers at retail prices.

Leader of the praying group, Dr. Moses Oladayo, explained that they were on the mountain for eight days, praying for God’s intervention in things of this country.

“Imagine we have been suffering from bandits attack, food scarcity, lack, unemployment among others.

“Fuel scarcity has come to stay without solution. You cannot travel, prices of foodstuff have risen above expectations. No food in the market, and where you see one, the price is beyond one’s expectations.

“I felt it’s only God that can help us, since human efforts have failed us. We cannot continue like this till the end of this year,” he said.

According to him, it’s in view of the hardship, and lately fuel scarcity, which made life difficult for Kaduna residents, that he decided to invite all stakeholders across the 23 local goverment areas of the state to come and pray for the betterment of the country.

He advised Nigerians, especially Kaduna residents, not to relent but pray for God’s intervention as things would get better soon.

He said if fuel scarcity continued, people may not afford the cost of transportation this festive period, adding that it will be difficult for some households to have full celebration because they can’t afford to buy even a cup of rice.