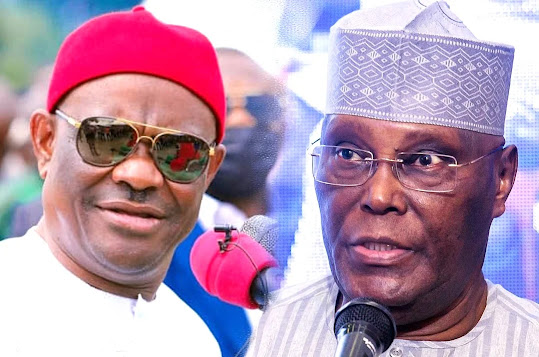 After months of bickering, the Presidential candidate of the Peoples Democratic Party, PDP, Atiku Abubakar and the G5 governors led by Governor Nyesom Wike may be moving toward reconciliation.

Governor Wike had indicated that his group is open to reconciliation during a visit to Governor Bala Mohammed of Bauchi State. Wike had told reporters that the door of reconciliation was never closed.

“In fact, that is the hallmark that PDP stands for. We have never closed the door and we would not close the door. All we are saying is, ‘look, let the right thing be done.’ If the right thing is done, the whole country would know that the election is over,” he said.

Although the olive branch appears to be with the old condition that the National Chairman of the PDP, Iyorchia Ayu must go, however, it appears that Atiku is interested in the reconciliation.

Atiku had through a statement by his spokesperson, Paul Ibe, said he is equally open to reconciliation.

Sources close to the camp of Governor Wike said that the events of the past couple of weeks have shown Mr Atiku that he cannot run the election on his own.

According to multiple sources, a gang up of southern governors, who are also Christians, could work in favour of Mr Atiku, who is hoping that the North would interpret it as such, spurring the north to work for Atiku.

The decision of Bauchi State Governor to join the fray of those opposed to Atiku is believed to have prompted Atiku to be considering reconciliation.

Those in the know said Atiku’s political permutation is on the North giving him bloc votes. And the recent comments by Governor Ortom played into his hands, but with Bala Mohammed’s utterances, Atiku was really spooked and quickly fixed the crack.

To apply the maximum pressure, the G5 governors had another meeting where it was learnt that Governor Mohammed advised the governors to refrain from making the battle a religious one.

As things stand, a reconciliation between Atiku and the G5 governors may make the latter look weak, especially with Ayu remaining on the seat.

Also, there is the effect of Obi in the south-south, who has so far defied the speculations in Atiku’s camp that his momentum would soon die off.

Some weeks back, the Governor of Edo State, Godwin Obaseki, had stated that the Obidient Movement would soon run out of steam.

“People who say they are Obidients, of course, they will be but they will run out of steam. We know how to manage elections, how many people have been able to do what we are doing? They can’t even form their campaign council not to talk about having a timetable for election, you get it,” he said during the inauguration of the PDP campaign council.

Governor Obaseki also reportedly denied the Labour Party of the Samuel Ogbemudia Stadium for their rally.

During an interview on Politics Today, Mr Obaseki confirmed that the State denied the party from using the venue.

The LP party responded with a massive rally at the Edo State capital, Benin City, where thousands thronged out to support the Labour Candidate.

The surge in the popularity of the Obidient movement in traditionally PDP strongholds appears to be putting into question the strength of the reconciliation of Atiku and the G5 governors.