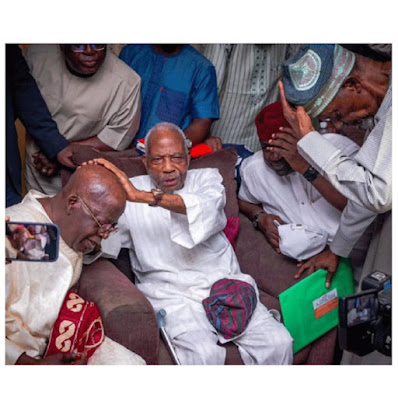 Following the mixed reactions that trailed the visit of the presidential candidate of the All Progressives Congress, APC, foremost leader of the pan Yoruba socio-political organisation, Afenifere, Pa Reuben Fasoranti has stated that he remains the leader of the group.

According to Pa Fasoranti, the frontline Yoruba group is for Tinubu and not for Peter Obi of the Labour Party.

Earlier, Chief Ayo Adebanjo, who was said to be in acting capacity of the group, had endorsed Obi, as he insisted that it is the turn of the South-East to produce the next President.

Shortly after Adebanjo’s endorsement of Obi, Pa Fasoranti threw his weight behind Tinubu’s 2023 bid and blessed him.

Speaking on the issue of the leadership of the group as well as the support for Obi and Tinubu, Pa Fasoranti said “I’m still the leader of Afenifere. Aferenifere has not endorsed Obi, we are endorsing Jagaban (Bola Ahmed Tinubu) for the presidency.

“As you can see, the trend, the approval and the acceptability. You could see what happened when Tinubu came to meet me in Akure. Media carried the whole thing.

“Adebanjo does not have the capacity to warn me not to welcome Tinubu. Can he do that successfully?

“As you can see, Jagaban is accepted and we approve of him. Obi has no stand in our mind at all.”