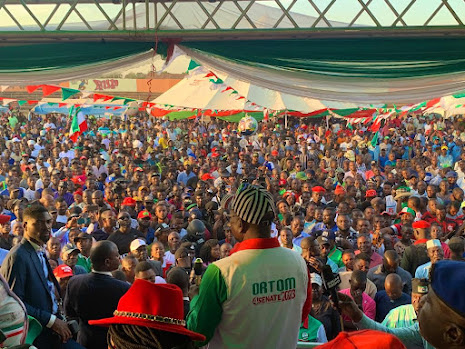 Benue Coalition for Democracy, BCD, has accused some bigwigs in the Peoples Democratic Party, PDP, of sponsoring thugs to attack and disrupt Governor Samuel Ortom’s senatorial campaign rally in the state.

It was gathered that hoodlums suspected to be political thugs attempted to disrupt the Benue North West Senatorial Campaign Flag-off organized by the PDP in the Gboko Local Government Area of the state on Tuesday.

Reacting to the development, the Benue BCD, in a statement issued by its Coordinator, Aloysius Gbakaan, noted that the group was on ground at the JS Tarka Stadium Gboko when the hoodlums stormed the event.

The group fingered some supporters of the PDP presidential candidate, Atiku Abubakar, and loyalists of the party’s national Chairman, Iyorchia Ayu for being responsible for the incident.

The statement reads in part, “We observed that even before Governor Samuel Ortom and his entourage arrived at JS Tarka Stadium, we saw a group led by the former Council Chairman of Ushongo Local Government Area Joseph Asawa around the stadium with t-shirts and posters of the PDP presidential candidate Atiku Abubakar.

“They were attempting to force their way into the densely crowded arena. The group showed zero regard for the security personnel stationed at the stadium. Leader of the group Joseph Asawa had earlier in the day boasted on his Facebook wall that they were going to storm the Gboko rally.

“At that point, other youths who could no longer tolerate the insults from the Atiku group stepped forward to remind them that Atiku has insulted Benue people enough with his insensitive comments against the killings by Fulani herdsmen and the people of the state have resolved to reject him come 2023.

“They warned the Ayu/Atiku group to stop spitting on the graves of hundreds of the innocent Benue people killed by herdsmen. It was at that point that physical confrontation ensued and the Atiku group members were given the beating of their lives and they retreated.

“As eye-witnesses, we have taken time to narrate the true picture of what happened in Gboko so as to set the records straight. The Atiku-sponsored youths were the aggressors. They had no reason to invade the PDP Gboko rally.

“We condemn the act of supporters of Ayu and Atiku and urge security operatives to investigate the incident and bring the culprits to justice.

“The 2023 election is a moment of decision for our survival! We will vote for only those who truly love and care about us”.