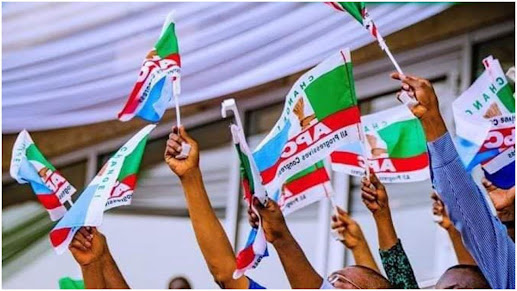 Some members of the Peoples Democratic Party, PDP have defected to the All Progressives Congress (APC), in Sokoto State.

The APC Chairman in the state who received the defectors on Sunday said the latest defection was another set of scores of Peoples Democratic Party (PDP) members from Dundaye, Gumburawa and Gidan Bubu districts in Wamakko Local Government Area of the state.

The Minister of Police Affairs, Maigari Dingyadi, who spoke at the event, described the development as a success.

“The APC administration under the watch of President Muhammadu Buhari has brought positive developmental projects aimed at impacting the lives of people.“

“The government had for the past seven and half years continued to roll out sustainable programmes that impacted positively to the lives of the less privileged in the country.

“Therefore, I called on all of you to sustain more support for the victory of APC in order for the party to continue to provide more democratic dividends for our people,” he urged.

Speaking at the event, the state APC Chairman Isa Sadiq-Achida, described the defectors as pillars of democracy in the area.

He urged the new members to feel free and work for the success of the party in the forthcoming elections in the state.