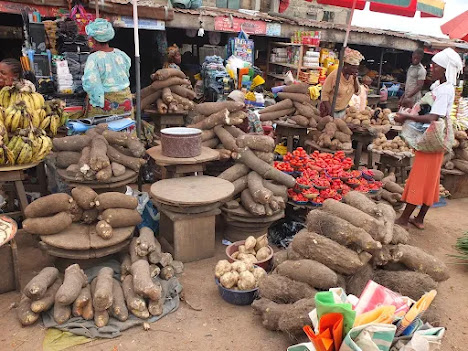 Market women and foodstuff consumers who came to buy foodstuffs at the popular Monday Market in Kurmin Gwari, Kaduna, could no longer hold their tears as foodstuff was not only sold to the highest bidders but sold out before noon.

Many retailers of rice, beans, garri, yam, and groundnut who were in the market with the expectation to, as usual, buy in large quantities and resell to consumers at retail prices were disappointed as only a few of the items were brought to the market and sold straight from pick-up van to customers without offloading.

Most housewives who wanted to buy in small quantities went home empty-handed.

The few available items, mostly rice, beans and yams were sold in bags, which most consumers could not afford.

Many retail buyers and consumers pleaded to buy in small quantities, but the sellers ignored their plea, only to sell to those who can afford to buy in bags.

Within an hour, all available bags of rice, beans and other foodstuff vanished from the market.

One of the drivers who conveyed yams and beans to the market, Mr James Obilikwu said that many farmers were afraid to go far into the bush to farm due to fear of bandits’ attack. Besides, he said, some of those farmers are not even willing to sell the little harvested, adding that fuel scarcity has also compounded the problem as no driver would like to go far.

” There is not enough foodstuff this year. Movement of foodstuffs from a different state to the other is also hindered due to bandits’ attacks. Besides, there is an acute shortage of fuel supply in the country. The movement and transportation become difficult,” he said.

Mrs Ruth Ojoeima, astonished that she could not find any foodstuffs in the market, expressed fears that Nigerians might be in trouble by next year as foodstuff is no longer available.

She called on President Muhammadu Buhari to find solutions to the problems of insecurity and the looming famine in the country.