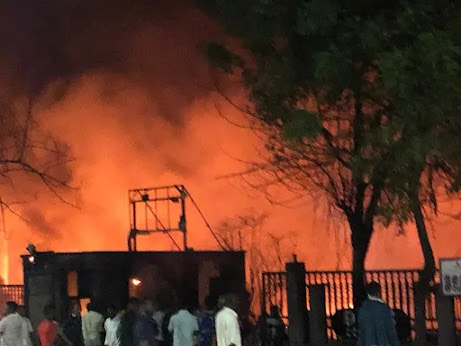 The Kano State Fire Service has confirmed the death of three persons following a fire outbreak in a house located at Kabuga, Yan’azara, within the Kano Metropolis.

He said on Tuesday, the Fire Service Control Room received an emergency call at about 22:40hrs from one Marwan Umar, where he reported a fire incident at Kabuga Yan’azara.

He pointed out that the Service mobilised its operatives from the central fire station.

“On arrival the scene of incident at about 22:50hrs they found that one building with two apartments is on ablaze.

“A building of one floor of about 100×40 feet used as a dwelling house.

“First apartment with two rooms, one parlour, one toilet and corridor from the upper floor well alight.

“While the second apartment with one room and parlour, one single room and one toilet from the upper floor well alight,” Abdullahi further said

He stated that according to an eyewitness in the second apartment, a student of the Federal College of Education (FCE), Ibrahim Lawan, the fire started from the first apartment and spread to another apartment.

He added that the inability to inform the fire brigade in time led the fire to spread, noting that three persons were involved.

He further stated that all victims were rescued, unconscious and later confirmed dead.

He maintained that the victims were handed over to their parents for burial.

Abdullahi revealed that the cause of the incident is under investigation.