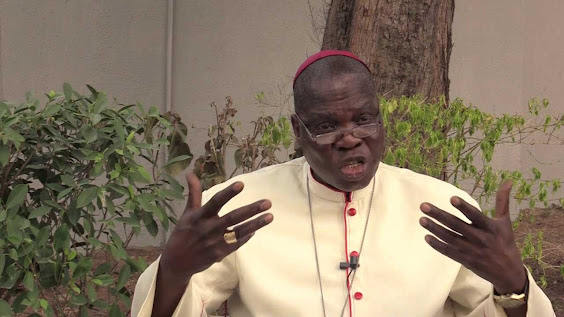 The Archbishop of the Catholic Diocese of Kaduna, Most Reverend Matthew Man-Oso Ndagoso, has told the Independent National Electoral Commission, INEC, that Nigerians expect nothing less than free, fair, peaceful and credible elections in 2023.

He noted that every part of the country is eager for change following the suffering Nigerians are going through, stressing that killings, kidnapping, banditry and all forms of criminality have become the order of the day in the country thereby affecting everybody in the country.

Delivering his Christmas message on Saturday in Kaduna, Archbishop Ndagoso also charged INEC to ensure every Nigerian exercises his or her constitutional right of electing candidates of their choice in next year’s elections.

According to the Archbishop: “No eligible voter should be disenfranchised for lack of access to his or her permanent voter’s card and polling stations. Votes selling or buying is not only illegal according to the Constitution but a sin before God.”

He lamented that Christians in the country celebrate this year’s Christmas amidst fears and anxiety caused mainly by continued acts of banditry, kidnap for ransom, armed robbery, unabating farmers-herders conflicts, insurgency and ritual killings that take the lives of many of our compatriots daily.

He added that Nigerians are now faced with a very high cost of living affecting all aspects of life with more and more people in the land joining the ranks of those already living below the poverty line.

The Archbishop said that Nigerians know the culprits with bad leadership that encourage mediocrity, nepotism and ineptitude that in turn breed corruption and bad governance that has earned the country the unenviable position of the world’s capital of the poor.

He appealed to all people of goodwill to ensure that no matter how much sacrifice it requires, they should ensure they collect their PVCs and vote for the right candidates to change the narratives of the country for the good of all Nigerians.

He challenged the Church to trust in God and not to live in perpetual fear even when they do not understand fully what the future portends for them especially as they continue to struggle with insecurity, biting poverty, incessant kidnapping, killings and anxiety over the 2023 general elections.

He added: “Like the shepherds, we must have the faith and trust to face our future with confidence and determination knowing that our God is with us all time no matter how difficult and challenging our situation may be.”

Speaking on the same-faith ticket, he explained that one would have thought that given where Nigerians are with the fragile nature of national cohesion, no considerate and sensitive politician would think of running a same-faith-ticket, especially at the national level because of the threat it poses to the delicate national cohesion.