2023: Ogun ADC not merging with any party – National chairman Nwosu 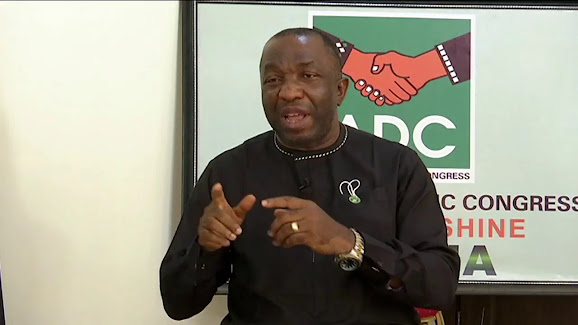 The National Chairman of the African Democratic Congress (ADC), Prof. Ralph Nwosu, has dispelled the rumour that the Ogun State chapter of the party is planning a merger with another political party ahead of the 2023 election.

Saga Gist reports that the Abeokuta Federal High Court had ordered the Independent National Electoral Commission (INEC) to expunge the names of ADC candidates from its list for failing to comply with the Electoral Act in the conduct of their primary elections.

The Labour Party (LP) had dragged ADC, its governorship candidate, Biyi Otegbeye and the 26 House of Assembly candidates of the party to court.

Since the judgment was delivered, there have been speculations that the party might merge with another party in order to wrest power from the ruling All Progressives Congress (APC).

But while addressing newsmen at the party’s secretariat in Abeokuta on Monday, Nwosu insisted that the party is not considering a merger with any party, stressing that Otegbeye and others would be on the ballot.

His words: “We have been inundated with calls and reports from some quarters that the ADC has opted to work with another political party in the state for the coming elections; that the party no longer has candidates. This is false in its entirety and we use this medium to state that all our candidates remain as they are.

“We have no pact or working relationship with any other political party. We are going to contest the election and fix Ogun State back. No political party should ride on our temporary challenge to hoodwink our members or lie to the public that ADC has joined them.”

Nwosu stated that the ADC is formidable to provide a credible alternative to the “clueless” APC.

He accused the APC of using the court to get other strong opposition parties disqualified from contesting.

“If you have performed and served meritoriously, you will fear no opposition, but in the current circumstance, the APC is fearful of the reward of its own incompetence and failure,” he said.

Speaking further, Nwosu described the court judgement disqualifying ADC candidates as a temporary setback, revealing that the judgment has been appealed.

He expressed optimism that the “appeal court will do justice to our democracy.”

He said: “We approached the Court of Appeal knowing that they will further amplify the beauty of the democratic process and bring credibility to our democratic journey as a nation.”