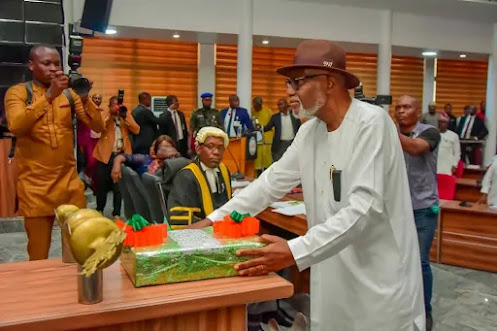 Oluwarotimi Akeredolu, the Governor of Ondo State, has submitted to the state House of Assembly a N272.736 billion budget proposal for the 2023 fiscal year.

During a plenary session on Monday at the recently renovated House of Assembly Complex, Igbatoro Road, Akure, which was inaugurated last week, Akeredolu presented the budget, dubbed “Budget of Shared Prosperity,” to the lawmakers.

The session was presided over by Speaker of the House Bamidele Oleyelogun.

The proposed budget for 2023 is larger than the estimated total budgetary expenditure for the fiscal year 2022, which was N199,282,437 billion.

Akeredolu stated that the 2023 budget was created using input from Town Hall meetings held with numerous stakeholders throughout the state.

He emphasised that the carefully chosen projects and programmes in the budget span a number of important sectors, including infrastructure and the environment, education, health, the social safety net, security, and industrialization.

The governor claimed that his government has continued to advance its developmental agenda in critical sectors with the resources available to the State Government.

“Notwithstanding the present climate of uncertainty, we are steadfast in our resolve to put the economy on the sustainable path to realize its full growth potential. By the grace of the Almighty God, we shall leave no stone unturned as we continue to build a strong, vibrant and resilient economy, powered by good governance and people-centered programmes,” he added.

Bamidele Oleyelogun, the House Speaker, stated in his speech that the presentation is in accordance with the Federal Republic of Nigeria’s 1999 Constitution (as Amended).

He observed that any budget’s contents undoubtedly have a significant impact on everyone’s quality of living in society.