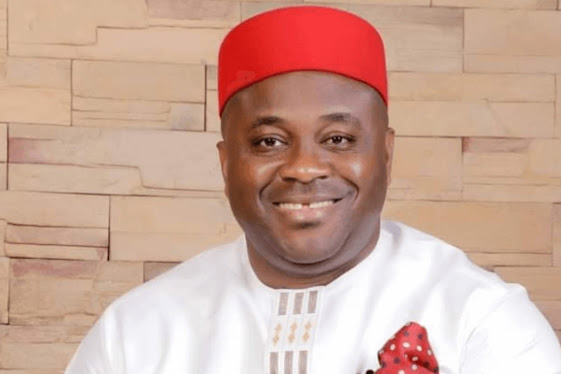 Reactions have continued to trail the incarceration of the governorship candidate of the Young Progressives Party, YPP, Akwa Ibom State, Senator Bassey Akpan.

Saga Gist reports that Senator Akpan, who is also representing Uyo Senatorial district, is cooling his feet at the Ikot Ekpene Correctional Centre for money laundering and graft.

Akpan was convicted by Justice Agatha Okeke of the Federal High Court Uyo on a six-count charge bordering on money laundering and receipt of exotic cars worth two hundred and four million naira (N204m) from a businessman, Jide Omokoro when he was the Finance Commissioner.

The Senator never denied the allegations as he explained that those vehicles were given to him as gifts for his campaigns in 2014.

In line with the provisions of Section 22 of the Money Laundering Prohibition Act 2021 and in contravention of section 15(12)(d) of the Money Laundering (Prohibition) Act of 2011, as (amended) and punishable by section 15(3) of the same Act, the Senator who was found guilty by the presiding judge was sentenced seven years in prison in each of the charge which would run concurrently, day and night.

That is to say that if the case is not upturned at the appellate court, as the Senator had already appealed, he would likely spend three and half years in custody.

However, five days behind bars, Akpan’s discourse has continued to resonate across the corners of the State from both the elite and the ordinary citizens of the State to the Free Readers Association who converge every morning at Ibom plaza, which is the centre and beehive of activities in Uyo metropolis.

Vendors display their newspapers in a corner of the ever busy Ibom plaza and men who cut across all age brackets would gather like ants attracted by honey to look at newspaper headlines and make engaging arguments which in most cases are on top of their voices.

Unfortunately, the incident of December 1 has continued to send chills in the spines of his supporters as so many of them from investigations are yet to recover from the shock, though some of his followers, a day after defected to the PDP where they were welcomed by the governor.

Until his incarceration, Senator Akpan also known as OBA was a force to reckon with and was bulldozing the nooks and crannies of the State gaining more supporters ahead of the 2023 elections.

Earlier, he raised the alarm that the governor, Mr Udom Emmanuel planned to commit him into prison by bringing up his money laundering case so that it would pave the way for the emergence of his anointed candidate, Pastor Umo Eno of the Peoples Democratic Party.

That is to say that the judgement did not come as a surprise to the Senator and his team as they had a premonition of the outcome of the case.

However, the governor had since denied the allegation and warned peddlers against roping him into Akpan’s ordeal, stressing that he was not even a governor when the case was instituted against him (Senator Akpan) by the EFCC.

The governor lamented, “I entered Abuja, everybody was calling me saying this candidate said you want to imprison him. This matter came even before I became the governor. I don’t know the facts of the case, I’m not a judge, I don’t know anything. Those people that have cases with EFCC, should go and sort out their cases and just leave blackmail and propaganda.”

Few days after the governor’s statement, OBA’s worst fears became a reality and the immediacy of getting off the legal hook was still in doubt.

One of the governor’s media aides, Rev Richard Peters had staked his neck at different occasions in defence of the Governor’s innocence over Senator Akpan’s travails.

He said, ”a cursory look into the character of Governor Udom Emmanuel clearly shows that he doesn’t play politics of bitterness and hatred. The Governor is a man that believes in the rule of law and respects democratic principles.

“It amounts to gross ignorance and it is strange to attempt to perceive the governor as a vindictive clown, an attempt that has already failed a reality test. Governor Udom Emmanuel will continue to play politics with human face and good conscience and no amount of deceit peddled around can change this glaring fact.”

But, the Chairman, Forum of Civil Societies Organisations in Akwa Ibom, Dr Harry Udoh said OBA’s incarceration was not devoid of political undertones, saying that the manner in which he was thrown into prison had invariably won the sympathy of the public and would make some indecisive voters to vote him.

“It is apparent that Distinguished Senator Obong Bassey Albert’s incarceration is politically motivated. The same government that took out several injunctions against the EFCC and ICPC from investigating violations and criminal abuse of office by the immediate past government of which the incumbent was part of, is the same one that has surreptitiously procured the incarceration of OBA.

“Rather than the negative impact that the orchestrators of the invidious act had expected, it has rather accentuated the profile of the man, and drawn many undecided voters to his side. The incarceration is helping his course, more than anything else,” Udoh noted.

However, the continued stay of the Senator at the correctional service is raising a lot of controversies in the State, especially on his fate to appear on the ballot at the 2023 elections

A legal practitioner in Akwa Ibom State, Ekemini Udim during a radio interview said in legal reality, the judgement has affected OBA’s chances of winning the elections even though INEC does not have the constitutional backing to stop or disqualify him or any other candidate from contesting the election.

According to him, “INEC on its own does not have the constitutional powers to disqualify candidates. This judgement has partly made OBA a convict in court of competent jurisdiction. Even though the court did not pronounce that, ‘you are hereby disqualified from contesting election because that was not the focus of the court,’ the conviction alone can ruin his political career.”

He expressed hope that the judgement could be upturned at the Appeal Court if his team of lawyers are able to present a superior argument.

“If the grounds of appeal are well couched and the facts support a discharge, then certainly he can be discharged and acquitted at the appellate court, but if the facts are so bad, that is where there is a problem because it is the fact that will be used in making appeal. It’s all about having a superior argument and what his legal team has to offer,” he noted.

Meanwhile, interviews with some of the OBA’s supporters showed that they have confidence that the Senator will come out soon and emerge victorious at the 2023 polls.

One Edward Akpan told our correspondent that though it was painful, the people are still hoping that OBA will be on the ballot so that they can satisfy their heart desires and conscience.

Meanwhile, a lawyer and Human Rights Activist, Inibehe Effiong Esq had expressed fear that the case may not be determined till the 2023 elections.

He said even if Senator Akpan wins at the polls, the election tribunal will nullify his election irrespective of the outcome of the appeal, noting that his conviction for corruption will affect his electoral fortunes and acceptability.

His words, “Senator Bassey Albert (alias OBA) will appeal his conviction, and file a motion for bail pending appeal (which may or may not be granted). This judgement will not bar him from contesting the election because INEC on its own does not have the constitutional power to disqualify candidates.

“If he wins, the election tribunal will nullify his election. No matter the outcome of his appeal, his conviction for corruption will affect his electoral fortunes and acceptability. The case will likely traverse all the way to the Supreme Court. For now, he remains in prison.

“I doubt if this case will be finally determined before the 2023 gubernatorial election in Akwa Ibom. There’s more to be said, but I’ll stop here for now.”