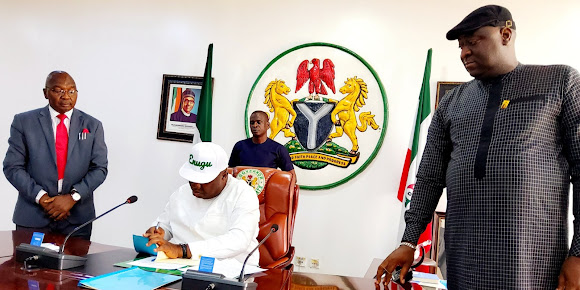 Governor Ifeanyi Ugwuanyi of Enugu State, on Friday, assented to the 2023 appropriation bill of One hundred and sixty six billion, six hundred and two million, four hundred and sixteen thousand, seven hundred and seventy naira (N166,602,4I6,770.00) passed by the State House of Assembly.

Signing the approved 2023 budget into law, Governor Ugwuanyi stated that the exercise has signified the completion of the process of appropriation of funds for the business of governance of Enugu State in the year 2023 “sequel to my presentation of the State’s 2023 budget proposal to the Enugu State House of Assembly on 15th December, 2022.”

The governor added that his administration, through the instrumentality of the 2023 budget, tagged: “Budget of Consolidation and Transition,” seeks to consolidate its achievements in various sectors of the state and transit the state’s governance to the inbound administration.

Governor Ugwuanyi, who expressed delight that the State House of Assembly, as always, gave the budget proposal expeditious consideration and approval, reiterated his administration’s readiness and preparedness to commence the 2023 budget implementation in earnest, with effect from January 1, 2023.

Pointing out that “this is also the last time I would be assenting to the full year budget of Enugu State as Governor, under the 1999 Constitution of the Federal Republic of Nigeria, as amended,” Governor Ugwuanyi beseeched God to “avail us the grace of substantial realisation of the projected revenue in the 2023 budget as well as peaceful atmosphere for its diligent implementation.”

He thanked the leadership and members of the State House of Assembly for responding to the imperative of accelerated consideration and approval of the budget, adding: “I acknowledge the dedicated Clerk and other staff of the House whose contributions to the legislative business, though invaluable, are largely unsung.”

Governor Ugwuanyi, therefore, enjoined the good people of Enugu State to remain prayerful and stay the course of peace, wishing them a prosperous New Year.

Presenting the approved budget for the governor’s assent, earlier, the Speaker of the State House of Assembly, Rt. Hon. Edward Uchenna Ubosi , described it as “a wonderful and realistic budget”, disclosing that critical sectors such as works, agriculture, education, health and water resources got huge allocations.

“It shows that you (Ugwuanyi) are prepared to finish all the works you started and the ones you promised the good people of Enugu State. It is a very commendable one Your Excellency. It shows that the budget is a very realistic one,” he said.

The Speaker on behalf of his colleagues appreciated Governor Ugwuanyi for his immense support and exemplary leadership qualities anchored on peace and good governance, stressing that the legislators are grateful that they have enjoyed cordial working relationship with the governor, members of the State Executive Council (EXCO) and other government officials in the State.

“On this note Your Excellency, may I invite the Clerk of the House to join me to present to you the approved budget of N166,602,4I6,770.00 for your assent and for the benefit of the good people of Enugu State to the glory of God,” he added.

Also present at the event were the Deputy Speaker, Rt. Hon. Uche Ugwu and other members of the State House of Assembly, the Secretary to the State Government, Prof. Simon Ortuanya, former Chief of Staff and candidate of the Peoples Democratic Party (PDP) for Udi/Ezeagu Federal Constituency, Rt. Hon. Dr. Festus Uzor, the Deputy Chief of Staff, Government House, Enugu, Prof. Malachy Okwueze, the Commissioner for Budget and Planning, Dr. David Ugwunta and other members of the State Executive Council (EXCO), and the Clerk of the House, Barr. Dr. Emmanuel Udaya.