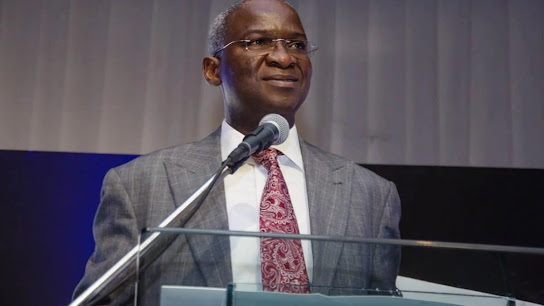 The Minister of Works and Housing, Babatunde Fashola has inaugurated a 0.6 kilometres reconstructed road at the Alex Ekwueme Federal University, Ndufu-Alike, Ikwo, in Ebonyi State.

Fashola, represented at the inauguration by the Federal Controller of Works in the state, Mr Steve Oluwadun, described the road as “an important asset of the ministry reconstructed on behalf of the Federal Government.”

The minister said that students of the institution were already expressing renewed enthusiasm with regard to attending classes because defective roads have been restored to good condition.

He said: “This is consistent with our progressive ideal of improving the human condition. This process continues presently with the handing over of this road at the Alex Ekwueme Federal University as a critical intervention to support education. We must make the point that although this is a civil work project, it is an investment in education.

“During the reconstruction of the road, over 25 people were employed in the process contributing to the job creation initiatives of the federal government. We hope that the school would ensure that this asset is used properly and not abused.”

He noted that the FG was steadily bridging the gap in the nation’s infrastructural needs through a gradual process of repairs, renewal and construction on highways and schools.

“It is undebatable that the quality of education would be impacted by the quality of infrastructure and learning environment. We have intervened in 64 internal road projects in various federal tertiary institutions and handed over 46 of such as at March 2022.

“We have another 18 roads ready to be handed over while 19 are currently being attended to in similar institutions across the country, totalling 83,” he stated.

Prof. Sunday Elom, Vice Chancellor of the university, described the event as historic, noting that the institution was deeply grateful to the federal government.

Elom represented by the Deputy Vice-Chancellor, Administration, Prof. Abel Ezeoha said the road was strategic for smooth vehicular and predestined movement to its College of Medical Sciences and Faculty of Law.

“The road, before this intervention, was practically impassable because of the quantum of dust and mud on it during the dry season. We sincerely hope that the entire stretch of the road would be completed in future,” he said.

Abigail Ijeh, a student of the institution thanked the FG for the project noting that it will aid students in meeting their academic demands.