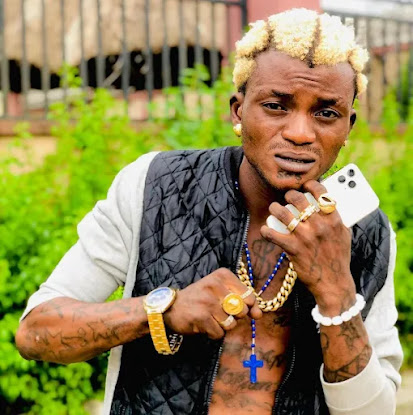 Ahead of his December show at the Afrika Shrine, controversial Nigerian singer and songwriter, Habeeb Okikiola, a.k.a Portable, on Thursday paid a visit to the ancestral home of Afrobeat musician Fela Anikulapo.

Portable, who made the revelation in a post accompanied by a clip on his Instagram page, described his visit as a homage.

He said, “Came to pay homage to my daddy, December 28 Portable in live concert, come and enjoy what is called entertainment. Akoi one million fans, see you soon @femiakuti, @yeniakuti.”

Portable, who during his visit got the opportunity to meet Femi Kuti, the first son of the genre’s pioneer Fela Anikulapo Kuti, was later seen with veteran media personality Yeni Kuti, the eldest daughter of Afrobeat legend Fela Anikulapo.

The outspoken Nigerian singer is one of the most consistent Nigerian entertainers.