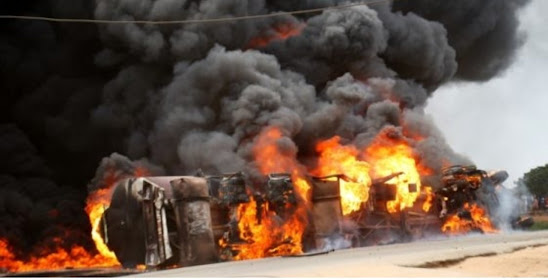 The Oyo State Fire Service has said its men are still assessing and collating the number of damaged properties and their worth during yesterday’s fire incident.

General Manager of the state fire service, Rev Canon Yemi Akinyinka, made this disclosure during a telephone conversation on Friday.

The tanker had lost control and burst into flames, wreaking havoc at the Apata junction, opposite the Oando filling station.

The general manager of the state fire service, Akinyinka when contacted on Friday, said that it took men of the command more than three hours to quench the fire.

Akinyinka said that men of the command arrived at the scene when the tanker was already engulfed in flames.

He told newsmen Friday that men of the fire service have already reported at the scene to assess the situation, explaining that the worth and the number of the damaged property cannot be ascertained yet.

“We are still collating our report because we don’t want to give a report that will be faulted by the public.

“But no life was lost. I cannot tell you the number of shops by now. If I said 15 now and the traders said that it is 10, what do we do?

“The tanker had burst into flames before our men got there”.