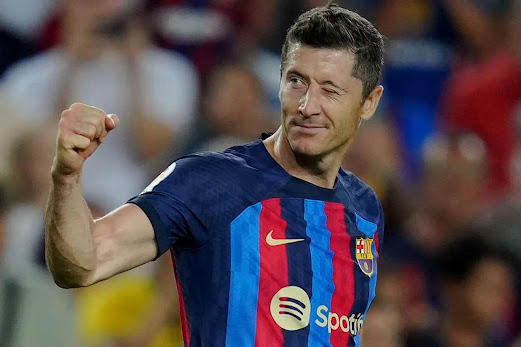 Barcelona striker, Robert Lewandowski is reportedly among three Blaugrana players who are against the idea of Lionel Messi’s return to the club in the near future.

According to Spanish outlet, El Nacional, Lewandowski is understood to be looking to remain Barcelona’s biggest star, which would not be the case if Messi returns to the Catalan club.

The Poland international reckons Messi would steal the spotlight from him if he comes back to Barcelona.

The former Bayern Munich star has already made it evident to Barcelona club president Joan Laporta and director Mateu Alemany that he is against the idea of Messi’s return.

The report added that Barcelona goalkeeper Marc-Andre ter Stegen is also thought to be against Messi’s comeback, as the pair is apparently not on good terms.

Youngster Ansu Fati is also not willing to see Messi returning to Barca, as that would mean that he would have to hand over the No. 10 shirt to the Argentina captain.

Fati has already struggled for game time so far this season, and his minutes would be reduced further if the 2022 FIFA World Cup winner returns.

Recall that Messi left his boyhood club Barcelona to join Paris Saint-Germain in the summer of 2021.

Messi’s contract at the Parc des Princes will expire at the end of the current season.