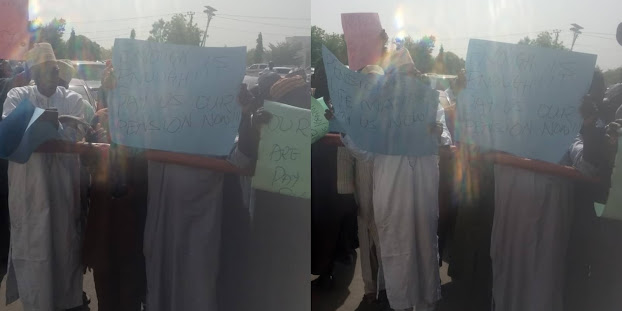 Pensioners in Niger State disrupted the swearing-in ceremony of newly elected Local Government Council chairmen over unpaid pensions and gratuities by the state government for over seven years.

They blocked the main entrance of the Government House, Minna, the venue of the ceremony preventing guests from entering or going out, while brandishing placards bearing various inscriptions.

A pensioner, Mallam Abubakar Abdullahi speaking to newsmen described the act of the government as wicked and insensitive to the plights of pensioners in the state.

He stated: “This government is wicked; how can you owe people for seven years and still have the mind to be living as if nothing is wrong? We are aware that they junket [about] the country in private jets while we are wallowing in abject poverty and suffering.”

The aggrieved pensioners accused the government of mismanaging funds released by the federal government to the state that could be used to clear the backlog of pensions and gratuities as well as reduce the hardship experienced by people of the state.

“The government has refused to keep to the numerous promises it had made to us in the past. There is not a single promise they made to us that was met. Many of us are dying from treatable diseases due to lack of funds to pay medical bills and our children are unable to return to school,” he maintained.

However, it took the intervention of the governorship candidate of All Progressive Congress, APC, Umar Bago who was unable to gain access to the venue due to the blockage created by the protesting Pensioners, to defuse the situation.

He pleaded with them to sheath their swords, promising that if elected as governor of the state in 2023, their issue would be given top attention, and asked them to move to the UK Bello Theater and wait for him.

The pensioners, who in their numbers arrived at the Government House gate armed with mats, pillows, buckets and other personal belongings to occupy the entrance until their issue was attended to, however, moved to the said venue to wait for the APC candidate.