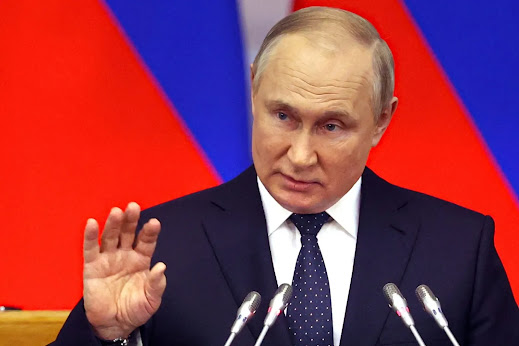 Kremlin has said Russian President Vladimir Putin will not hold the end-of-year media conference this year.

Al Jazeera reports that Kremlin spokesman, Dmitry Peskov, who disclosed this on Monday, also noted that President Putin “regularly speaks to the press, including on foreign visits”.

The spokesman did not give a reason for not holding the marathon conference, which usually lasts several hours.

However, observers viewed the move as a break with protocol due to Russia’s war in Ukraine, which began in February.

Vladimir Putin, who has been in power since 2000, has held a news conference in December most years of his rule – an event that he has used to gloss over his image on national TV.

The suspension of this year’s news conference marks the first time in a decade that Putin would not hold the December event, which is a rare opportunity for reporters outside the Kremlin, including international journalists, to ask the Russian president questions directly.

The war embarked on by Russian forces in Ukraine has become a global discourse, with the West seeing it as an act of aggression on the sovereignty of Ukraine, thus, meted a series of economic sanctions on the invading Russia.