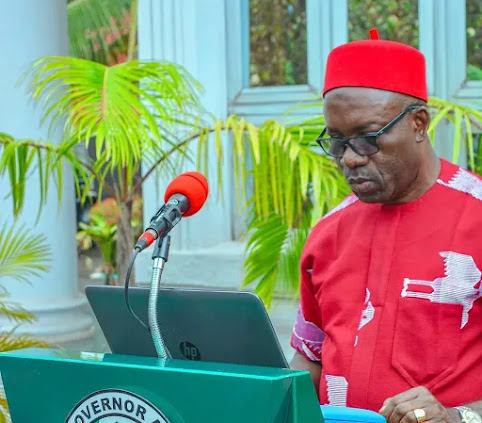 Anambra State Governor, Prof. Chukwuma Soludo has terminated a road contract in Aguata Local Government Area, over alleged incompetence and delay in delivery by the contractor.

Though the name of the company handling the contract was not mentioned, a video of the governor’s visit to the site has been making the rounds on the internet.

In the video, Soludo who paid an unscheduled visit on Sunday to the road construction site referred to the company as useless and lacking the capacity to deliver the job.

“See what you are doing. I have terminated the contract, and you are supposed to return the money you were paid. Useless company! We gave you this contract on the basis that you are an indigenous company but see what you are doing. This is what we see. You blocked the entire highway and nobody can pass. Now, I am going to my hometown, how do I go? This is a federal highway.

“This job was supposed to have been finished in October, and that was the contract you were given. Other companies that were given the same contracts like you have all delivered.”

The governor refused to heed any plea from the obviously concerned project manager, as he rejected explanations that the road had peculiarities that made it difficult to deliver at the appropriate time.

“There are other very difficult terrains, and the contractors have delivered. I have terminated the contract and there is nothing you can tell me about it. Take off all your equipment from this place and move out because another person is coming to take over the job. If you continue, it is at your own risk because we are not paying you a dime, instead, we are asking for a refund.”

Sources said the contract terminated, is a federal highway, leading from Soludo’s community to Ekwulobia town, both in Aguata Local Government Area.