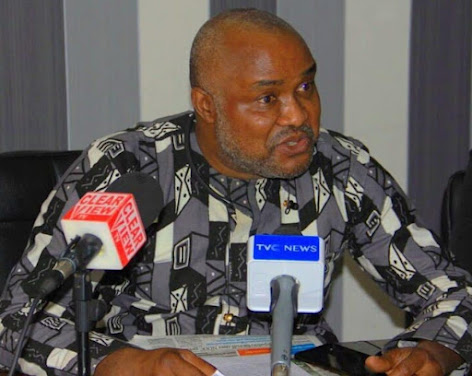 Human Rights Writers Association of Nigeria, HURIWA, has asked the Inspector General of Police Alhaji Usman Alkali Baba to direct his Deputy Inspector General of Police (FCID), Mr. Johnson Babatunde Kokumo not to undermine an appeal instituted by an indigenous importer Madumere Ugochukwu based in Alaba market Lagos running his business under Nigrshine Industry Limited which he filed against two Chinese citizens Gaoxi Ong and Chen Xiao Ming. The product in contention is AKT electric bulb.

HURIWA said it was informed by credible court officials in Abuja that a now-retired judge of the Federal High Court Justice Taiwo Taiwo had issued an injunction ordering the confiscation of inferior brand of the products allegedly imported into Nigeria by the Chinese nationals which reportedly violated an extant trademark ownership of the Indigenous importer but the same judge just before he retired overturned his own injunction which made the Nigerian businessman to immediately appeal but there is now a likelihood that the police that conducted background investigation and found out that the Chinese businessmen allegedly forged trademark licence and are allegedly flooding Nigerian markets with fake products are now plotting to destroy the rest of the matter which has reached the Court of Appeal.

The group said it has already decided to also Petition the Foreign Affairs ministry to step in because the Chinese nationals used the China customs to destroy products meant for Alaba market from China under the verified trademark ownership of the Indigenous businessman whose right to the distribution of the products in Nigerian markets has been sabotaged by the Chinese just as the matter according to the Rights group dovetails into brazen attempt by Chinese businessmen to adopt unfair tactics and compromises to use law enforcement agents to continue to sabotage the trademark ownership of the Indigenous businessman based in Alaba. The matter is registered as suit number CA/ABJ/PRE/ROA/CV/80IMI/2022. The Inspector General of Police is the number one Respondent.

Specifically, in the AFFIDAVIT IN SUPPORT OF MOTION FOR LEAVE TO APPEAL, the Nigerian businessman who reportedly has the genuine trademark ownership stated as follows: “I Madumere Ugochukwu, Male Adult, Christian, Nigerian Citizen of NO. 14, Aba Close, Area 8, Garki, Abuja do make oath and state as follows:

HURIWA through the National Coordinator Comrade Emmanuel Onwubiko said it will storm the Chinese Embassy tomorrow with a petition challenging the infractions committed by the Chinese Customs service against the Nigerian businessman who reportedly has the authentic trademark to umpire the product which are made in China.