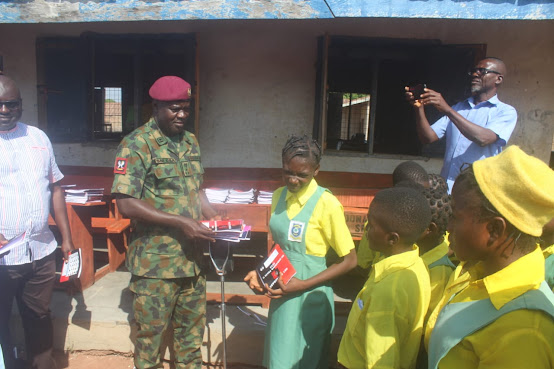 The 401 Special Forces, SF, Brigade has deployed more personnel to some volatile areas in Benue State to forestall criminality.

The SF has also lined up its Civil Military Cooperation (CIMIC) activities aimed at strengthening the cordial relationship that exists between it and some host communities.

Brigadier General Uba said, “The ongoing exercise is part of concerted efforts by the Chief of Army Staff (COAS) Lieutenant General Faruk Yahaya in ensuring that more troops are injected into volatile areas in order to ensure that citizens enjoy hitch-free celebrations during the Yuletide season without fear of crime and criminality which are associated with the period.”

He explained further that the COAS also directed all Nigerian Army formations taking part in the ongoing exercises across the country to continually carry out CIMIC activities in order to strengthen the existing cordial relationship with their host communities.

Brigadier General Uba noted that he decided to concentrate on educational outreach for the year 2022, instead of the medical outreach it extended to benefitting communities in 2021, because he desired to encourage the return and resettlement of displaced children back to school.

In his remarks at the occasion, Chairman, Katsina-Ala LGA, Alfred Atera thanked the Brigade Commander for the kind gesture and prayed that the Army would come out victorious over the enemies of the State.

His counterpart in Logo LGA, Mrs Salome Tor also expressed gratitude to Brigadier General Uba for alleviating the plight of the pupils with the donations.

The traditional ruler of Anyiin, Chief Samuel Aluga pledged that he would do everything possible within his power to ensure that all needed cooperation and assistance is accorded the NA in the community whenever the need arises.

Describing the NA as “truly a people’s Army” Aluga said he never expected that people who would lay down their lives for its citizens would also extend outreaches to communities to better the lives of their wards.