Zamfara: We are ready for any reprisal by bandits in Dansadau axis – NAF 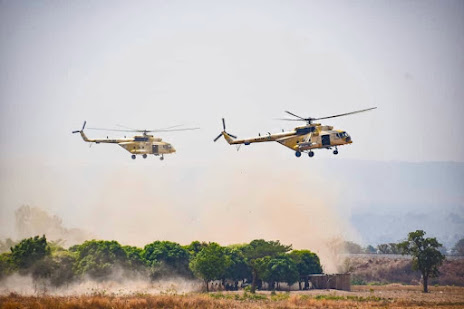 A source in Zamfara State has hinted that followers of bandits’ kingpins like Bello Turji, Halilu Buzu and Adamu Aleiru are regrouping for another attack after the killing of over 40 of their kind in Malele and Mutunji communities of Dansadau Emirate in Zamfara State.

The source said that Halilu Buzu’s boys were sighted along the Dunkurmi axis on their way to the Malele community while Adamu Aleiru’s gang were spotted along the Year Gada area, a border between Dansadau and Gusau, the State capital battle ready.

Recall that the bandits had between last week Saturday and Monday terrorized some villages, especially, Malele and Mutunji communities of Dansadau Emirate in Maru Local Government Area of the State.

Following the tension, the Air Component and ground troops attached to Operation Hadarin Daji confronted the bandits on a fire-for-fire operation and were said to have eliminated over 40 motorcycle-riding bandits in Malele.

The gun duel was carried out on Saturday when airstrikes from the Nigerian Air Force (NAF) and ground troops of the Nigerian Army, engaged the terrorists in a well-coordinated joint operation, according to sources.

Some of the victims said that the operation was not without some collateral damages, pointing out that some community members were killed during the gun battle between the military and the bandits.

However, a military source said the security operatives mobilised their troops and attacked the bandits with a series of airstrikes against the terrorists from different parts of the region.

The military source said the Nigerian Army and Nigerian Air Force (NAF) operations were yielding beneficial results in the area with several bandits neutralised in the battle.

It was gathered that banditry activities in the area have been on because of the ravaging crisis between Hausas and Fulanis over the devouring of farm produce which has made the area so volatile, especially in Malele, Maigoge, Yan Sawayu, Ruwan Tofa, Mai Awaki, and Zama Lafiya, all under Mutunji district of Dansadau Emirate Council.

According to the Nigeria Air Force Director of Public Relations and Information, Air Commodore Edward Gabkwrt, the Air Force operatives have been stationed in all strategic places and are ready for war against the bandits.