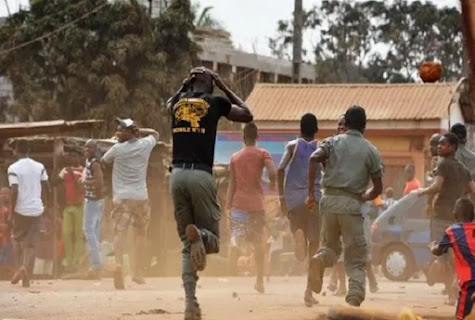 Houses and shops were destroyed following a fresh outbreak of violence between the Waja and Lunguda ethnic groups in Adamawa State.

Adamawa State Police Command confirmed on Tuesday that at least four houses and 11 shops were burnt down following the fresh clash which occurred in the evening of Monday, January 2.

The renewed clash between Waja and Lunguda communities occurred in the usual place, Lafiya town in Lamurde Local Government Area, where the two ethnicities are concentrated.

Sources said that a fresh clash erupted between 6 pm and 7 pm on Monday leading to hoodlums setting houses, shops and other properties ablaze.

Adamawa State Police Public Relations Officer, who disclosed that normalcy has since returned to the area, said the Command has commenced an investigation and, in due course, those behind the incident will be brought to book. He further confirmed that Commissioner of Police Sikiru Akande had visited the scene of the incident.

Saga Gist reports that the Waja-Lugunda crisis has been a perennial problem, recurring every year, and sometimes a number of times a year. The feud had roots in land ownership tussle.

The crisis has deepened over the years and created a climate of suspicions that undermined efforts by governments, NGOs and well-meaning individuals to resolve it in the past.