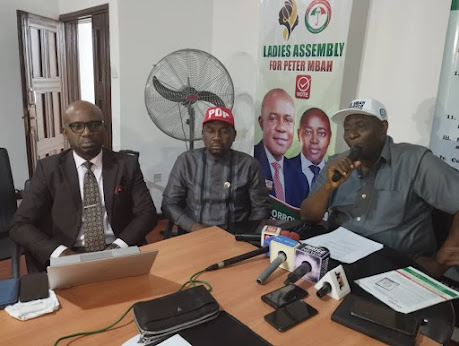 The Peoples Democratic Party, PDP, has urged the Economic and Financial Crimes Commission, EFCC, to launch an investigation into the activities of Barr. Ugochukwu Agballah, the Enugu State chairman of the All Progressives Congress, APC.

The PDP made the call through the spokesman of the party’s campaign organisation, Barr. Nana Ogbodo at a press briefing on Tuesday.

Saga Gist reports that Agballah is in the news following a protest by some members of the APC at the party’s national secretariat.

They accused the chairman of embezzling over one billion naira.

However, Agballah had in a swift reaction, blamed the protest on the PDP, which it said was sponsoring crisis within the party. He denied embezzling any kobo belonging to the party.

At the press briefing, the PDP Campaign DG lambasted Agballah for dragging the ruling party into the APC internal affairs.

“Besides, the APC has never been a factor in elections in Enugu State, let alone now that all the key stakeholders of the APC in Enugu have abandoned the party to Ugochukwu Agballah and his godfathers.

“If the APC was in the ICU before his controversial emergence as the State Chairman, the party has now been effectively embalmed and consigned to the mortuary by the totalitarian, greedy, and corrupt leadership of Agballah and his two godfathers.

“However, we have, as usual been dragged into a purely APC affair by the loquacious Ugcohukwu Agballah, who has claimed that the protesters were sponsored by the PDP. Of course, Agballah’s penchant for looking for scapegoats rather than face his demons is legendary.”

While noting that the crisis rocking the Enugu State APC is protracted and predates the current electioneering season, Ogbodo said “some of the issues raised by the APC protesters are self-evident.

“For instance, we know as a fact that while George Ogara is paraded as the deputy governorship candidate and while his portrait adorns APC campaign posters and billboards, the name of Robert Ngwu is effectively in INEC records and website as the actual deputy governorship candidate of APC Enugu State. Is that not 419? Is that not fraudulent and obtaining by false pretences?

“Needless to waste our time on an attention-seeking rabble rouser, who has turned himself to a clergy without congregation.”

He called on Agballah “to go home and settle with his aggrieved party members and restitute to them whatever he has taken from them. This is not a fight between the PDP and the APC; it is squarely a fight between angry and deprived APC members and a greedy and conceited party leadership.

“In any case, if anybody deserves to be sued over this matter, it is Ugochukwu Agballah, who has defamed the Enugu PDP and its governorship candidate by dragging them into a matter that has absolutely nothing to do with them.

“We call on the Economic and Financial Crimes Commission, EFCC, to step in to investigate the weighty allegations boldly made by well-known APC party leaders against the duo of Chief Ugo Agballah and Chief Uche Nnaji.”