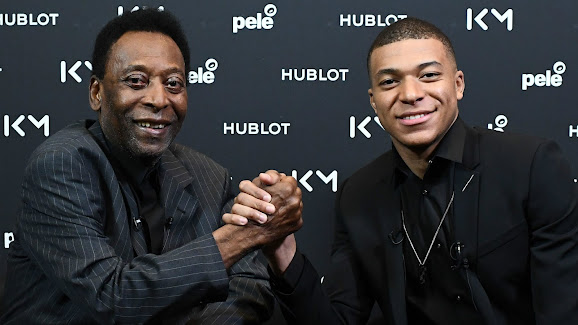 Late Brazilian football legend, Edson Arantes do Nascimento, also known as Pele, has always had a soft spot for many footballers, but perhaps he had it the most with France international, Kylian Mbappe.

From the very first moment Mbappe appeared in 2017 during his time at Monaco, the young French attacker started racking up praises from Pele himself.

The duo met a couple of times in person and developed a beautiful friendship. Pele always saw a lot of himself every time he watched the Paris Saint-Germain forward perform.

Mbappe always revered Pele as the true Greatest player Of All Time (GOAT) despite having Portugal captain, Cristiano Ronaldo as his childhood idol and playing with Argentina captain, Lionel Messi at Paris Saint-Germain.

The 23-year-old has all the attributes Pele used to possess when he was a youngster.

Pele was a generational talent and Mbappe is going through a very similar experience with France.

On December 18, 2022, Pele hailed Mbappe, who scored a hat-trick and another goal during France’s 2022 FIFA World Cup 4-2 penalty final defeat to Argentina after the match ended in a 3-3 draw after extra time.

Pele won three World Cup trophies for Brazil during his career as a professional footballer, while Mbappe has so far won one World Cup – the 2018 edition in Russia.

“Mbappe is a very outstanding player and will no doubt be among the greatest players in football,” Nigeria Security and Civil Defence Corps (NSCDC) FC head coach, Abubakar Ibrahim told DAILY POST.

“He is still young yet has shown us what he is capable of. He has already claimed five domestic titles in France and scored 250 career goals. At the age of 18, he won the 2018 World Cup, which was his first.

“He has given us a performance to remember, too, at the 2022 FIFA World Cup in Qatar against Argentina, where he bagged a hat-trick in the final. I truly believe on my part that he will be able to equal Pele’s three World Cup trophies even though it is not an easy feat to accomplish. He is just outstanding.”

Any time news about Pele’s health broke, Mbappe was always one of the first to send him a message.

Sadly, on Thursday, December 29, 2022, Pele passed away at the age of 82 after battling with colon cancer for several months.

Mbappe mourned the death of Pele in a post via his Instagram account, describing him as a ‘football king’ and saying his legacy will never be forgotten.

“Well, Pele’s death is a huge miss to all football fans and players all around the world,” Ibrahim said while paying his tribute to the late football icon.

“A poor black boy from Brazil rose to become one of the greatest footballers to ever walk the earth. As early as 17 years old, he has already won his first World Cup.

“He has lifted the World Cup three times and shown us that nothing is impossible. He has a total of 757 goals in 812 official matches. He was an artist on the pitch even if he didn’t use a brush and pen but the magic of his feet and the ball. He has left us, but his legacy will surely continue,” he added.