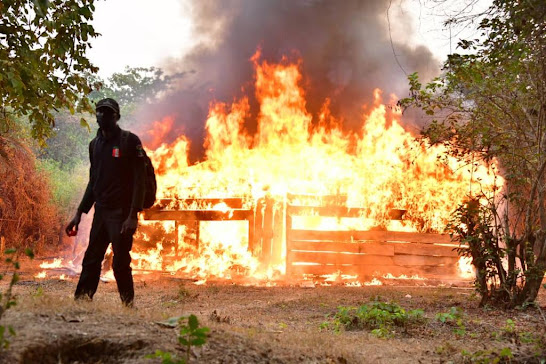 The National Drug Law Enforcement Agency (NDLEA) has busted a cluster of cannabis syndicates operating in the Opuje forest in Edo State.

The warehouses and tents storing over 317,417 kilograms (317.4 metric tons) of the substance have been destroyed.

A police impersonator, Omoruan Theophilus, 37, was used to move the drugs from the forests to the cities, said NDLEA Head of Media, Femi Babafemi.

“The cartels invest huge resources, cutting down economic trees of the forest reserves and cultivating cannabis on a large scale, running into hundreds of hectares.

“After harvest, they build warehouses inside the forest reserves and employ the services of armed youths to protect the warehouses 24/7”, he said.

The NDLEA disclosed it took hours of trekking by hundreds of operatives who were ambushed with bonfire by armed men as they made their way out of Opuje the following day.