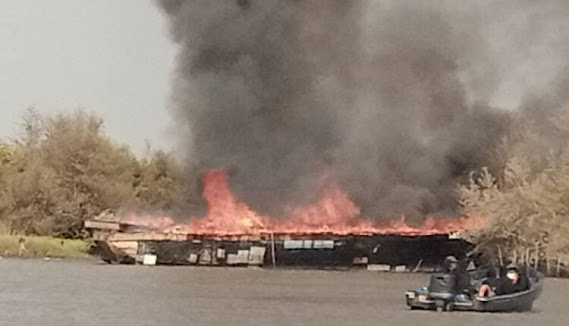 The Joint Military Special Forces on Tuesday busted a cartel that was stealing crude oil from Chevron/NNPC rigs on the high sea off the coast of Ondo State.

High Chief Bibopere Ajube, one of the leading campaigners for Niger Delta development, led the special combined military troops through the creeks with his men from Galaxy Security Services and tracked the spots of the bunkering syndicate within elephant grass.

With Ajube’s orientation of the axis, two monster boats utilised for the syndicate’s illegal operations were found at various locations where they had been concealed inside suspended raft homes on the island settlement of Awoye, in Ilaje Local Government Area of Ondo State.

It was gathered that the team was able to locate the oil rigs on the Atlantic Ocean i Ilaje Local Government Area, from where the cartel had been illegally syphoning crude oil.

After returning from the sea, the team towed the two gigantic boats from the Awoye community to a secure area and burnt them ablaze with the contents inside.

While lamenting the activities of bunkering syndicate, Ajube who said the act had undermined the economy of the country stressed that “We are making efforts to stop bunkering in our state and in the Niger Delta as a whole, though this is tedious and requires a lot of fund to do in terms of fueling the boats and staying on water for several hours to checkmate the perpetrators.

“It is unfortunate that people engage in bunkering, a development which has drastically reduced the country’s earning and had forced the government to going into borrowing.

“On this discovery, we will have to inform the appropriate quarters to the rigs fixed with a view to preventing the perpetrators from continuing their illegal activities.”