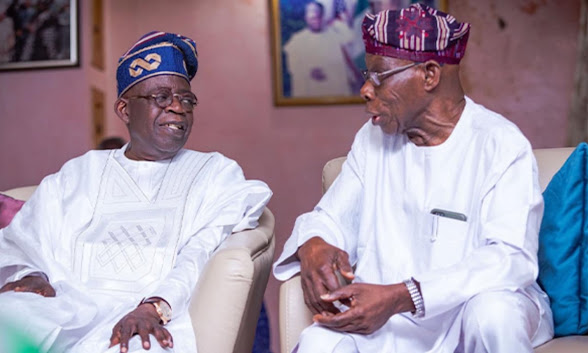 The All Progressives Congress, APC, said the visit of its presidential candidate, Bola Tinubu to former President Olusegun Obasanjo sometime last year in August was for diplomatic reason.

This was disclosed on Monday by the spokesman for the Tinubu/Shettima PCC, Kehinde Bamgbetan while featuring on the Channels Television’s Sunrise Daily.

Recall that Obasanjo had, in a New Year message to Nigerians, endorsed Obi, amongst other presidential candidates for the 2023 election, citing a track record of ability and performance.

Reacting to the endorsement, Atiku Abubakar, the presidential candidate of the Peoples Democratic Party, PDP, said Obasanjo’s endorsement does not reflect the wishes of most Nigerians.

Atiku spoke on Sunday through the spokesperson for his Presidential Campaign Council.

His counterpart, APC’s Bola Tinubu, said the endorsement of Obi by Obasanjo was worthless.

But while defending its candidate’s previous visit to Obasanjo, APC said it was for show of peace.

“That is what you call diplomacy with elder statesmen. It’s a normal diplomatic move that will show that you’re not out to fight anybody, Bamgbetan said.