Bayelsa State Governor, Douye Diri, has set up a team to resolve the dispute between Oluasiri Clan in the state and Kalabari neighbours ... 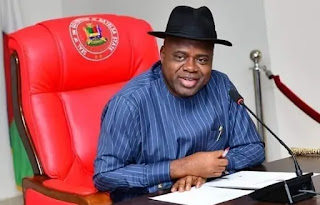 Bayelsa State Governor, Douye Diri, has set up a team to resolve the dispute between Oluasiri Clan in the state and Kalabari neighbours in Rivers State.
Oluasiri communities in Nembe LG of Bayelsa and their Kalabari Ijaw kinsmen are trading words over the location of oil wells within the boundary area.
On Thursday in Yenagoa, Diri met stakeholders from Oluasiri led by the paramount ruler, Chief Iyerite Awululu.
The governor appealed to Ijaw leaders and elders to end the age-long feud.
In a statement by his spokesman, Daniel Alabrah, Diri assured that the state government will protect its territories and work with the communities to ensure the safety of residents.
He also extended an olive branch to Rivers State Governor, Nyseom Wike.
“I’m calling on my brother governor of our sister state that this is a time that we need to look at the realities. As a people from the old Rivers State, we need to sit together and resolve our internal disputes, which should be easy to do because both feuding communities are of the Ijaw extraction.
“We have no difference between the Nembes and Kalabaris. They are all Ijaws and so no other person should beat the drums of war against two friendly Ijaw clans,” he said.
Diri announced that his deputy, Lawrence Ewhrudjakpo, will chair a committee to drive the process of peaceful resolution of the boundary adjustment issues.
He added that his administration would engage security agencies on the need to curtail acts of lawlessness, particularly in the Oluasiri axis.
“I will sit with my security commanders and see that we can beef up security in Oluasiri to protect lives and property. We will take some security measures in the interim pending when a substantive police station will be set up,” Diri said.