A multi-million Naira residential building was on Thursday demolished by the Enugu Capital Territory Development Authority, ECTDA. The age... 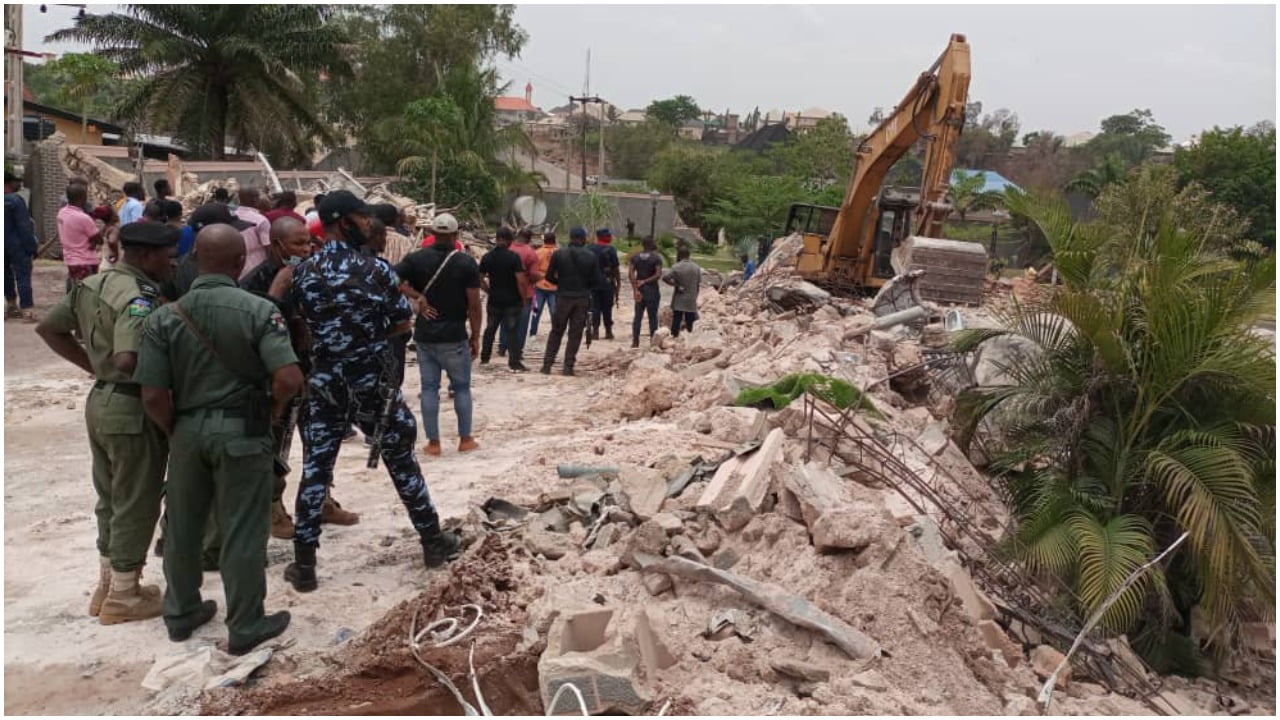 The agency told journalists that the edifice belonging to the Chancellor of Coal City University, Mr. Chinedu Ani, was erected on waterway.

ECTDA said the property was illegally constructed on the road linking Ekulu GRA through Onoh quarters to Oshimili and Enugu-Onitsha expressway.

Chairman of ECTDA, Dr Josef Onoh, who spoke to newsmen shortly after the demolition said that the owner of the proper, Ani, was given an approval in 2016 to build on 5800 square meters in his own property, a residential house and a swimming pool, but that the owners of the estate petitioned the agency, alleging that Mr. Ani developed beyond the size of the land he bought from them.

“On my assumption of office, Rockonoh properties petitioned the ECTDA again and told us that the development constituted a nuisance and that the owner went ahead after approval to develop 5800 square meters, he went ahead and developed past one hectare of land without title documents.

“What we did is development control which is the sole responsibility of Capital Territory. We wrote him a letter on the 18th December 2020 and he did not respond to any of our letters, then we got submission on all the parties involved and we found out that from all the records in the capital Territory that he blocked a public access road that had a bridge and converted it to his private property. The road linked GRA to Trans-Ekulu and we are having traffic problems in Trans Ekulu. He converted Ekulu River into a fountain and a pool inside his house which was not part of his approval,” Onoh stated.

He further disclosed that he personally went to Ani but that Ani refused to respond or make any submission until the agency obtained a court order asking Ani to comply, yet he disregarded the court order.

“To my shock he (Ani) barged into this office with a team of thugs and policemen and told me that he is untouchable, that he has made money and that he is highly connected and that if I tried to do development control in his property, he would have me killed. The law of the capital territory makes it clear that if you threaten officials of the capital territory in the discharge of their duties and you are found guilty, it’s six years imprisonment.

“We wrote to him again February 2021to submit all title documents showing that he has approval to develop one hectare of land aside from the one he purchased, but he could not provide any single approval, rather he disregarded and undermined the authority.

“Instead of him complying he went again and started building another duplex behind the house without approval and we wrote him again on the 2nd of March and the Governor gave me this job and asked me to adhere strictly to the master plan of the city and he complied and have carried out this job without any fear and despite intimidation. On March 5th 2021 we gave him final demand notice,” Onoh explained.

Narrating his own side of the story, Ani said that he was shocked that the ECTDA pulled down his house despite Governor Ifeanyi Ugwuanyi’s intervention, noting that he vacated the court order for demolition of the property.

He accepted that there was a road that transverse through the area before he built on the land, but that the Rockonoh Company that sold the plot to him gave him a go ahead to close the road.

“The Onohs sold the land to me and they told me that the road was created by their father when RCC came to construct the estate and that their father dismantled the bridge before they sold to one Walter Aneke who sold to me and before I bought the land I went to them and asked them if I should I acquire this place because I remember that while I was a child there used to be a road there, the only problem is that they wanted money from me,” Ani said.