Hundreds of students from tertiary institutions owned by the Oyo State government, on Tuesday, stormed the State Secretariat to protest wh... Hundreds of students from tertiary institutions owned by the Oyo State government, on Tuesday, stormed the State Secretariat to protest what they described as poor state of education in the State.

The students, while calling for overhauling of the State’s education sector, blocked the popular Bodija-Secretariat Road.

This led to heavy traffic gridlock along the Bodija-Secretariat Road.

Saga Gist reports that commuters plying the road had a hectic day as they spent several hours on the road.

Some of the commuters had to pass through another routes to get to their destinations.

The protesting students, drawn from all the tertiary institutions owned by the state, lamented the poor state of education in the state. 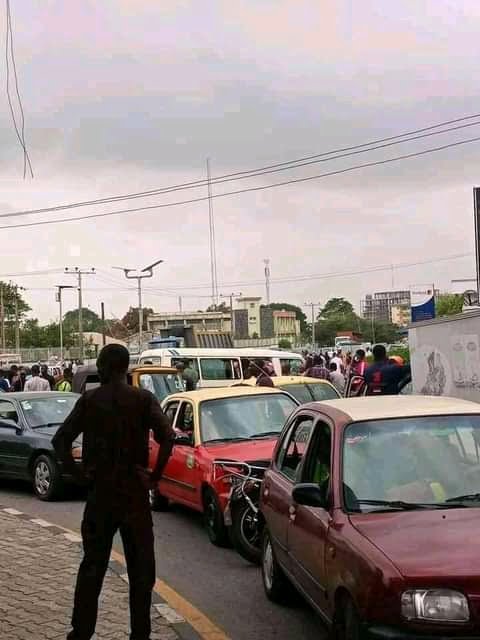 The students also condemned the attitude of the State government towards lecturers.

The protesting students, who blocked the main gate of the state Secretariat, also frowned at the alleged tyrannical operation of Platinum Consultant, a consultant engaged by Governor Seyi Makinde to oversee the activities of tertiary education in the State.

But, Commissioner for Education, Science and Technology, Barrister Olasunkanmi Olaleye while reacting, described the protest embarked upon by the students as needless.

Olaleye noted that all the issues raised by the students had been addressed.

He added that lecturers in the tertiary institutions owned by the State government had no reason to go on strike.
“The students are agitating for infrastructural development in the institutions, lack of accreditation of courses and the immediate call-off of JAC-inspired strike action currently going on in their various institutions

“JAC has no reason to go on strike. There is regular payment of the minimum wage. The 11 months arrears will be paid by the government. All courses at the Adeseun Ogundoyin Polytechnic, Eruwa, have been accredited.

“Also, the capital grant has already been released to the College of Education, Lanlate, while 14 new courses have just been accredited for the First Technical University (Tech-U), Ibadan.

“However, the Council of Oyo State College of Agricultural Technology (OYSCATECH) Igboora only recently wrote to seek government’s support in respect of accreditation,” he added.