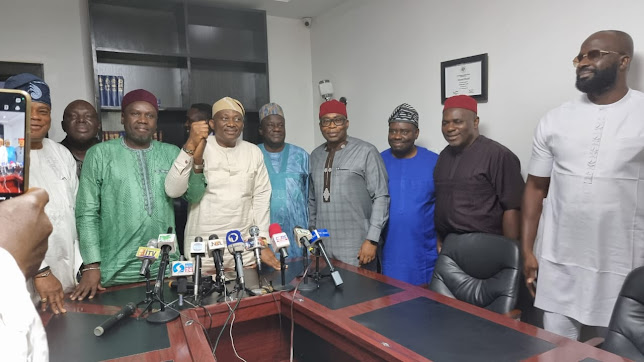 Ahead of next year’s election, the Peoples Democratic Party (PDP) House of Representatives caucus has visited a former chieftain of the All Progressives Congress (APC), Daniel Bwala, to woo him to join the party.

The leader of the delegation, House Minority Leader, Hon. Ndudi Elumelu, who met with Bwala, Wednesday in his Guzape office in Abuja urged him to join the PDP to rescue Nigeria.

Elumelu commended Bwala for dumping the APC on the principle, sanctity, and unity of Nigeria.

He explained that “Some of us were surprised because we know who you are, we know the role you played in APC coming to be in Nigeria. And for such a personality with many of them, many of you to have taken that bold step, including Babachir, we felt that it was honourable for us to come and see you.

Elumelu lamented that Nigeria under the President Muhammadu Buhari-led administration tilting towards a failed state.

The House Minority Leader said the Buhari administration destroyed the economy and education, adding that Nigerians now live in fear.

“APC is bad medicine and the step you have to leave them is the best. But I’ve also noticed that when you left, you did not even make a sign that you are going anywhere,” he added.

He continued, “we know you’re a lawyer. We are all political animals and we believe we should belong to different political parties to rescue Nigeria. And I believe that PDP provides that opportunity for us to rebuild Nigeria.”

In his brief remarks, Bwala told the delegation that he will reflect on it and get back to them soon.

Bwala who expressed his gratitude to the members of the PDP House Caucus described the opposition party as one of the most organised political parties in Nigeria.

He explained that “I am mindful of the multiple problems that we have in the country, I believe that there must be a unanimity by every Nigerian that what we are facing today is quite existential.

“The very fact that every fabric of our society is under threat. I think it calls for participation of everyone in first rescuing the country and then we can talk politics,” Bwala noted.

He continued “And I left APC on principles like you rightly stated earlier because I believe that there must be a nation before there will be politics and for there to be a nation, it has to be united.

“And after stepping down from the party I thought I could just stay in my private practice but you cannot see what is happening in the country and not tell yourself if there is any part you will play in rescuing the country to be a part of it.

“I am very mindful of it, I feel honoured by your coming. I will reflect on your request, but I must say I am deeply, deeply honoured. It is not a request you will naturally say no to, but it is something that you have to pray. In the same way I left the party I was in through reflective thought I want to reflect on your visit. But I am sure in the coming days whatever I decide Nigerians will know”.