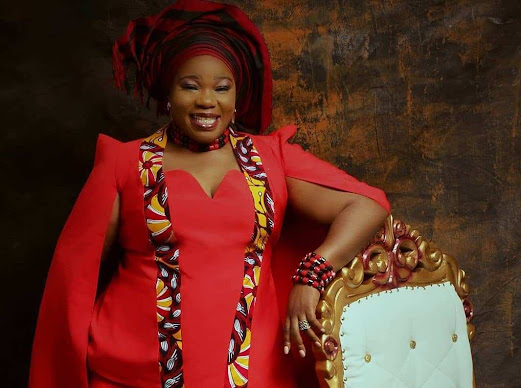 Some Nigerian entertainers and celebrities have reacted to the death of Nollywood veteran actress, Adah Ameh.

Saga Gist had earlier reported on Monday that ‘The Johnsons’ star, collapsed and died around 11 pm on Sunday.

Ada Ameh, known for her major role in the Africa Magic family drama, The Johnsons, had on June 15, opened up on her battle with mental health a few weeks before her demise.

The 48-year-old movie star had said the issue was gradually taking her life, but she believes that she will not die and will get over it.

Nollywood actress, Nancy Isime, tweeted, “My heart is so heavy, I don’t even know what to say! one of the people I look up to in the film industry. Rip aunty Ada Ameh. I’ll miss you so much.”

Similarly, former Big Brother Naija reality television star, Angel Smith said: “The fact that we have to experience grief at some point in our lives and then try to live with such an intense emotion is so mind-blowing. If the news is true, Rest well, Ada Ameh. I loved watching you on tv. I hope you’re at a place where pain is a fiction of our imagination.”

On his part, Popular On-Air Personality, Dotun, wrote, “Ada Ameh’s death is so painful. One of My fav on The Johnsons, especially when she says ‘a lucky lo lo’ ‘Apor’. She just lost a child and she now. May God put us through our tough times. This one is very painful.”

Also reacting, controversial Nollywood actor, Uche Maduagwu, wrote on Instagram: “Nollywood actresses why? I am so SAD now and in TEARS after seeing all the poetry written on social media, especially by some popular actresses close to Aunty Ada, who IGNORED her when she came out on social media and needed help, these actresses never sent a KOBO, yet were all busy showing off expensive new #CARS and #Dollars constantly on social media, now Dem be the first to write poetry after the sad news, who do us like this for Nollywood?”

Veteran singer, John Asiemo, popularly known as Daddy Showkey, wrote on Instagram: “Oh My God my Sister is gone, I always tell you that I will be there for because you are always there for me, you saved my life when down, Oh my sister rest well in the Lord’s hands Ada no be so oooo We talk am ooo Ah ah ah.”