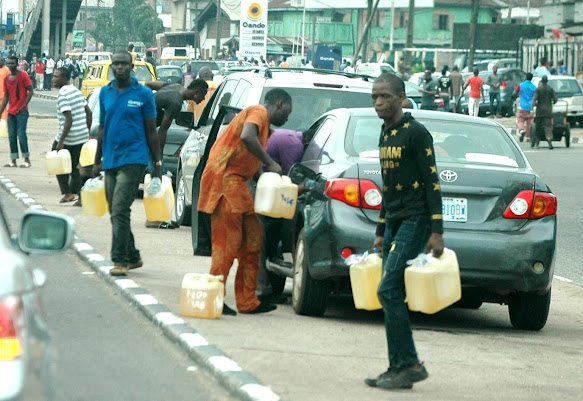 The Eid-el-Kabir festival is an avenue for Muslims to celebrate and give out to relatives and the needy.

However, this year’s celebration seems to be a bit different in Ogun State with various unforeseen circumstances preventing fun-seekers from having the yearly merrymaking.

On Friday, many residents travelling for the festival became stranded, struggling to get vehicles to convey them to various destinations.

It was gathered that the result of a lack of fuel in many filling stations across the Gateway State.

Since Thursday, many vehicles were held up in queues at the few fuelling stations dispensing petrol at a rate above the N165 approved pump price.

Our correspondent, who monitored activities across the state, reported that filling stations are selling the product at a price between N180 and N200 per litre.

The scarcity of fuel and the unending rainfall that started yesterday have dealt a heavy blow to commuters.

Some of those travelling on the eve of the festival had to return home due to the unavailability of vehicles and the rain.

“It has been a very difficult task to commute during this festive period. There are no vehicles on the road due to fuel scarcity. The rain is too much and the few drivers on the road are charging too much. How can a driver charge N2,000 from Sango to Oshodi and Abeokuta, which should not be more than N500?” a commuter, Adebisi Solanke, told our correspondent.

Asake, another resident, who travelled from Abeokuta to Idiroko lamented how he paid N1,000 from Ilaro to Owode and the same fare from Owode to Idiroko.

“Instead of N500, I paid N1,000 to Owode. I was also charged N1,000 from Owode to Idiroko instead of N300. This is too outrageous. But I won’t blame the drivers. There is no fuel. The rain is not stopping and the bad roads are flooded, destroying vehicles. This shouldn’t be happening at a festive period like this,” Asake explained.

Meanwhile, residents are optimistic that the situation would improve before Tuesday when the Sallah break will be over.