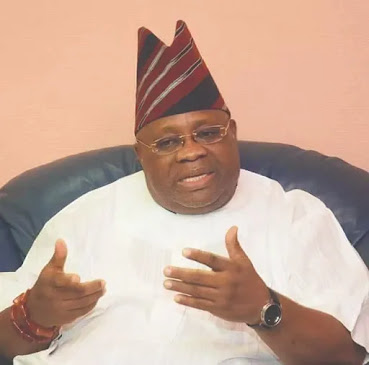 The Osun State Governor-elect, Ademola Adeleke, has described as fake, the news making the rounds that he has reneged on his promise to clear backlog of salaries and pensions.

The governor-elect, who called on the people to disregard the news, stated that he was not going to leave any stone unturned.

He also added that everything he promised during his election campaigns would be fulfilled.

Ademola Adeleke had featured in a Channels TV interview, where he had discussed many issues relating to governance in Osun State.

In a statement signed by Olawale Rasheed, his spokesperson, the governor-elect described it as a lie from the pit of hell.

It also maintained that Adeleke throughout the interview never at any point disowned his promise to clear outstanding workers’ salaries, pension and gratuities and better the lives of all Osun people.

“Contrary to the frustrated mind of the deceitful author, the Governor-elect explained in detail how he will source funds to meet the needs of workers, including his unique promise of reviewing issues of leakages in State finance and redirecting security votes to meet urgent State needs.

“In the interview, Senator Adeleke not only reiterated his pledge to address workers’ welfare which is number one on his five point agenda, he also affirmed that payment of workers’ entitlement will not be recorded as an achievement as a labourer deserves his pay.

“On the larger governance issue, the Governor-elect touched on his plans for education, security, job creation, agriculture, infrastructure, debt management and other germane issues. The people still in shock at their defeat probably could not concentrate on the full interview to watch a Governor-elect displaying his clear grasp of issues and his preparedness to hit the ground running.”

Rasheed, while reiterating that the governor-elect sees public office as a sacred trust in which honour and integrity are essential, added that Adeleke would fulfill all his electoral promises to the people.