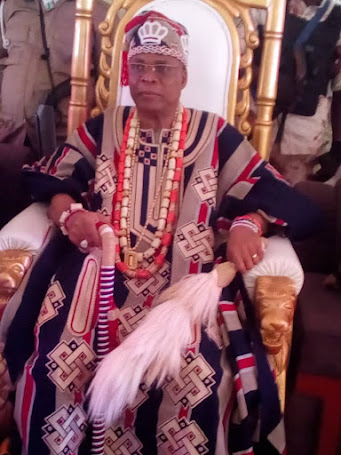 The Ebelu of Esure in Ijebu-Imusin, Ijebu-East Local Government Area of Ogun State, Oba Abdulsamad Kasali has cried out over the level of erosion devastating his community.

The traditional ruler lamented that flooding is threatening houses and farms, calling on the government to come to their rescue.

According to him, Esure community has sloppy ground, making it very prone to erosion.

He said the erosion problem was compounded because the rain water coming from Imushin, Odunopa and its environ had been channelled towards Esure town.

Speaking at his one year coronation anniversary, Oba Kasali worried that their property and farm produce might be further swept away by erosion if government fails to rescue them.

The monarch, who lauded the Governor Dapo Abiodun government for the provision of road network, however, warned that the roads might be eroded if no urgent action was taken.

While expressing displeasure over the loss of property to incessant flooding, Oba Ebelu pleaded that drainages be constructed to collect water from the five neighbouring communities in the area.

He regretted that despite the efforts of the State government to provide roads and healthcare, the town is seriously facing the problem of erosion due to the water coming from the five neighbouring communities.

He said, “Esure is facing the challenges of erosion because it is having a sloppy ground, and majorly, all the water coming from Imushin, Odunopa and its environ was channelled towards Esure town. We want government to come to our rescue.”

In his one year on the throne, Oba Kasali revealed that he had been able to build a new market in Ita Esure, provide solar power in the town, provide walkie-talkie and security materials to vigilantes, construct drainage channel at Olode street for flow of water, among other self executed projects.

Stating that the community had no security or health issues, he emphasised that government intervention was needed to stop errosion.

The event was attended by former Ogun Deputy Governor, Yetunde Onanuga and her husband, Chief Abiodun Onanuga, who is the Chairman of the occasion.