Shettima: ‘They are not big names’ – Tinubu’s campaign on hiring fake bishops 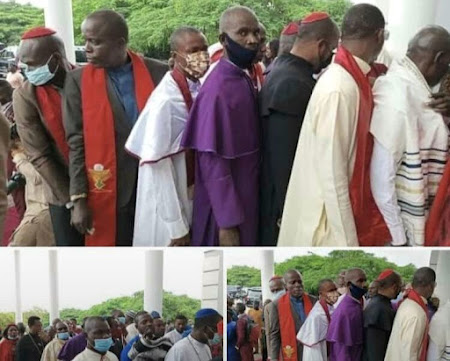 Tinubu Campaign Organisation, TCO, has debunked reports making the rounds that fake bishops were hired to attend the unveiling of Kashim Shettima.

Recall that the All Progressives Congress, APC presidential candidate, Bola Tinubu on Wednesday, unveiled Kashim Shettima, a Northern Muslim as his running mate amid controversy surrounding the same fate ticket.

The event had the presence of some unpopular Christian clergymen and women who dressed in cassock like Catholic bishops.

Footages of the clerics who were alleged to be fake bishops are currently trending on all social media apps.

A cross section of Nigerians have continued to knock the ruling party for playing game with Christians amid protests against the choice of Shettima.

The Christian Association of Nigeria, CAN, had in a statement on Wednesday disowned the bishops, saying they are not known bishops and have no church.

CAN challenged APC to reveal names of the fake bishops and the church they are pastoring.

However, in a move to clear the air, the TCO through its Director of Media and Communication, Mr. Bayo Onanuga said the bishops were not hired.

According to him, the clerics are patriotic Nigerians who believe in the unity of the country, stressing that they (bishops) are not big names in Christendom yet but coming up.

He said, “We want to say that those clergymen were not fake, not mechanics or yam sellers as the purveyors of hatred have made Nigerians to believe in the social media. They are not big names in Christendom yet, they are gradually building up their missions.

“They are church leaders who genuinely believe that Nigerians must eschew politics of hatred and religious bigotry and rather embrace politics of peace and nation building.

“We, therefore, deplore the hysterical twisting of the presence of these men and women in cassocks and the false accusation against our candidates, Asiwaju Bola Ahmed Tinubu and Senator Shettima”.