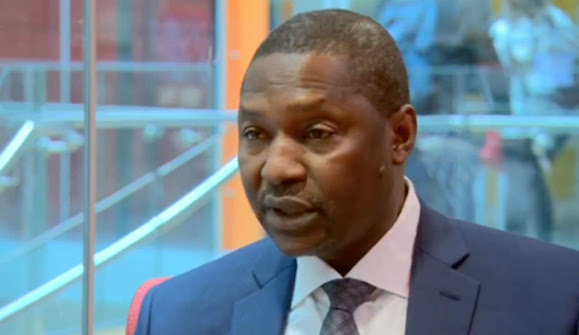 Human Rights Writers Association of Nigeria (HURIWA) on Monday described as a grand hypocrisy the extradition suit by the Attorney General of the Federation, and Minister of Justice, Abubakar Malami (SAN), against the detained Deputy Commissioner of Police, DCP Abba Kyari.

HURIWA’s National Coordinator, Comrade Emmanuel Onwubiko, in a statement, said the AGF should know better as a law officer of the country that the case of Kyari is a fait accompli which means the suspended head of the Inspector General of Police Intelligence Response Team cannot be extradited to the United States since he is facing drug-related crimes brought against him by the National Drug Law Enforcement Agency, NDLEA.

“This was prearranged and predetermined long before this decision of the Federal High Court which reflected the sinister plot of the AGF to frustrate the actual extradition of the Borno born police officer to the USA”, HURIWA said.

The Federal High Court sitting in Abuja, on Monday, dismissed an application by the Federal Government seeking permission to extradite Kyari to face trial over his alleged involvement with a notorious internet fraudster, Ramon Abbas, popularly known as Hushpuppi.

But the court, in a judgement that was delivered by Justice Inyang Ekwo, held that the extradition application FG filed through the office of the AGF as “incompetent and bereft of merit”.

Justice Ekwo held that the AGF being the Chief Law Officer of the country, ought to be aware that the Extradition Act, forbade the surrendering of a defendant that is already facing trial before a competent court in the country.

Commenting, HURIWA’s Onwubiko said, “The grand hypocrisy and shenanigan of the Attorney General of the Federation and Minister of Justice, Abubakar Malami (SAN) in the DCP Abba Kyari’s case is now obvious.

“The action of the AGF is condemnable since he deliberately filed another matter against Kyari before seeking his extradition when as a lawyer he ought to know that it is a fait accompli since under the law you can’t extradite someone already facing a separate charge in Nigeria.

“It is important to ask the justice minister why he didn’t file the extradition suit about a year after Kyari was declared wanted by the Federal Bureau of Investigation until the NDLEA imbroglio. The whole drama, Nigerians know, is a planned script.

“HURIWA insists that justice be served on the matter to deter corrupt policemen like Kyari still in the force. The suspended DCP must not be protected but duly prosecuted. It is shocking that this same Attorney General of President Buhari is often in a mad rush to extradite Southerners wanted in the USA but had to contrive a safe landing route for their man Abba Kyari.”