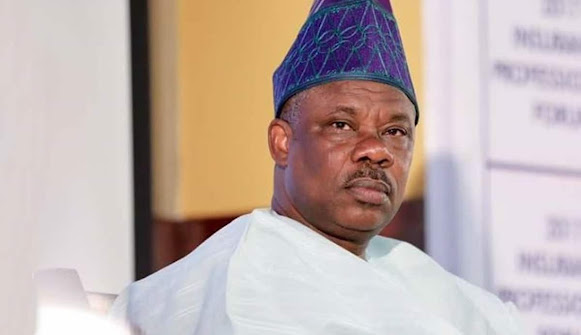 Ahead of the 2023 general election, more loyalists of the immediate past governor of Ogun State, Senator Ibikunle Amosun, have switched allegiance Dapo Abiodun, the incumbent governor.

Leading scores of other leaders to join the incumbent governor’s team in Abeokuta on Thursday was an erstwhile chairman of the All Progressives Congress (APC) in the State, Alhaji Tajudeen Lemboye.

Others are Chief Olu Odeyemi, Gbenga Adekanbi and Hon. Dotun Fasanya among other influential leaders from Ogun Central Senatorial District.

The former loyalists of Senator Amosun who were kitchen cabinet members of the former Governor, Ibikunle Amosun were received at the Presidential Lodge, Ibara, Abeokuta by Gov. Dapo Abiodun and other APC chieftains.

Addressing the returning chieftains, Gov. Abiodun commended them for their courage to “leave Egypt” and decision to rejoin the mainstream of the APC in the state and team up with him ahead of the general poll next year.

“You have got it right by taking this bold step in the sense that one cannot say because of sympathy you continue to stay with somebody and become useless. You should know what you want, where to get it and how to get it.

“We are passionate about the people’s welfare, wellness and well-being. We have been running and inclusive administration and even as you returned to the mainstream of the party today, we recognize that you as party leaders who had been with the party from the inception.

“Politics is a game of who gets what, when, where and how; it is how to better your life and that of others. You cannot do politics solely by emotions. There is a limit to where lies and daydreams can take you. The reality is that APC has moved beyond what some local demi-gods think it is. Ogun State is our common patrimony and nobody can dictate how it is run for all of us. Power belongs to God and He gives to whoever he wants, at any point in time. I want to welcome you to back to your house. Dapo Abiodun’s family and since you are not strangers, you will be promptly integrated,” Gov. Abiodun stated.

Chief Lemboye, on behalf of the returnees promised to leave no stone unturned to ensure total victory for Gov. Abiodun’s reelection.

He added that anybody who claims to be a member of the APC should abide by party rules and constitution. He warned violators that they risked disqualification. Lemboye said politics should be for service and not an avenue to pursue self-interest, adding that APC is a party of discipline, which would not tolerate disrespect to its guidelines and rules by anybody.