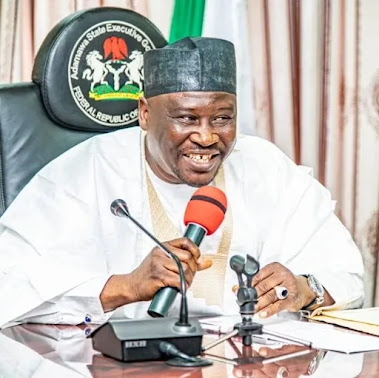 Governor Ahmadu Fintiri of Adamawa State who is also the governorship candidate of the Peoples Democratic Party (PDP) for the 2023 election, has unveiled his female running mate, Professor Kaletapwa Farauta.

Fintiri unveiled Farauta, Wednesday at the Banquette Hall of the State House in Yola during a ceremony that had massive attendance by men and women supporters mostly wearing newly designed Fintiri-Farauta (FIFA 2023) campaign logo of the PDP joint ticket.

Professor Kaletapwa Farauta who is currently the Vice Chancellor of the Adamawa State University, Mubi, was nominated as Fintiri’s running mate in June, not long after Senator Aishatu Ahmed Binani made history as the female governorship candidate of the state’s main opposition party, the All Progressives Congress (APC).

Farauta’s choice as Fintiri’s running mate was immediately seen at that time as a ploy by the PDP to counter the growing popularity of Binani who had admitted that she relied heavily on the women among the delegates to beat the six men in the APC governorship primary to emerge winner.

Fintiri said at the Wednesday unveiling ceremony that the choice of Prof Farauta as his running mate was a result of a painstaking search and with the consent of the serving Deputy governor, Crowther Seth.

“I have worked with her (Farauta) as a visitor to Adamawa State University and tested her and she has proven to be a trusted and dependable person, just like the Deputy Governor, Crowther Seth,” Fintiri said.

The state chairman of the PDP, Ahmed Shehu who presented Prof Kaletapwa Farauta as the running mate to governor Finitiri at the unveiling ceremony, said Farauta has proven to be a great loyalist who can be relied on.

In her remarks, the PDP Deputy Governorship Candidate, Farauta said she remained very grateful for her nomination and acceptance.

“It is not for me alone but for the entire womenfolk,” she said, adding that she would do her best to serve the state for the overall development of humanity.