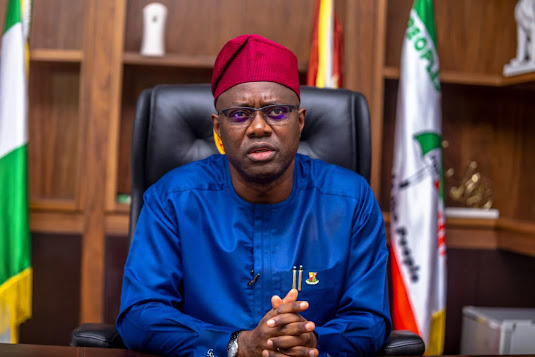 Governor Seyi Makinde of Oyo State has disclosed that the immediate past Aseyin of Iseyin, Oba Salawudeen Adekunle, signed the land document for the construction of the Iseyin campus of Ladoke Akintola University of Technology on his sick bed.

Makinde made this disclosure on Thursday.

Saga Gist recalls that the Aseyin of Iseyin joined his ancestors last month.

The monarch is one of the traditional rulers in the Oke Ogun geopolitical zone of the state.

Makinde has however revealed that the document for the land for construction of the LAUTECH campus was given to the monarch on his sick bed a few days before his death.

He said that the monarch signed the document less than 24 hours before he joined his ancestors.

Makinde while speaking during his visit to the palace on Thursday, insisted that the monarch loved and worked for the development of the town.

The governor promised that he will not abandon the family left behind by the monarch.

He said, “I made him know we had critics, who would criticise the economic benefits of the road. But Kabiyesi told me that his forefathers passed through that road to found Iseyin, and that if it does not have economic benefits, it definitely has historical and cultural benefits to the Iseyin people.

“Secondly, less than two days before Kabiyesi passed on, the document for the land where LAUTECH was situated was given to baba on the sick bed and he signed it.

“The document was sent back to LAUTECH, the Pro-Chancellor and his team then went through it and noticed an error, which was corrected and returned to Kabiyesi in the hospital.

“Baba signed it less than 24 hours before he joined his ancestors. I will not abandon the wives, princes and princesses the late Aseyin left behind”.