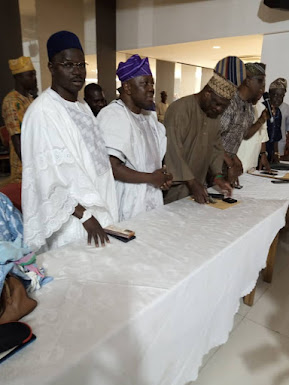 The candidate is Barrister Biyi Otegbeye, an indigene of Yewa South Local Government Area of Ogun.

Otegbeye and his running mate were unveiled at a meeting held at the Ibara residence of the former governor on Monday.

Saga Gist reports that Amosun himself was present at the unveiling, alongside other factional members of the All Progressives Congress (APC).

Otegbeye was the House of Representatives candidate for Yewa South and Ipokia Federal Constituency in 2019, under the APC.

He had defected from the Amosun camp to join the Prince Dapo Abiodun group for the APC ticket, rejecting the ticket of the Allied Peoples Movement (APM) he was offered by the then governor.

Ahead of the 2023 elections, Otegbeye returned to the Amosun camp and obtained the ticket of the APC.

The legal practitioner lost the primary election to Gov Abiodun and headed to court thereafter.

As he left the APC to actualise his ambition under the platform of the ADC, Otegbeye withdrew his case against Abiodun and the suit was dismissed by the court.

Saga Gist reports that the APC in Ogun is divided between Abiodun and Amosun factions.

The two groups held parallel ward, local government and State congresses, but the national leadership of the party recognized the Abiodun faction.