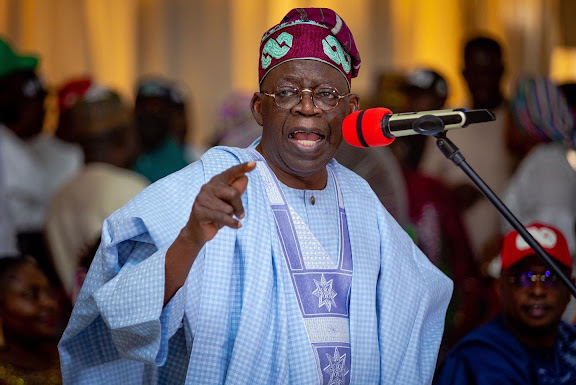 The last time I saw a mammoth crowd as I did when Asiwaju Bola Ahmed Tinubu, the All Progressive Congress (APC) standard bearer, visited Abeokuta last Wednesday was when President Muhammadu Buhari was in Ogun State to inaugurate the multiple projects that were done by Prince Dapo Abiodun earlier this year. However on Wednesday, August 16, 2022, Abeokuta turned into a Mecca of people on the strength of Asiwaju’s visitation to former President Olusegun Obasanjo and as Special Guest of Honour at the Artisans’ Day celebration.

Tinubu, who arrived at the Penthouse of the Olusegun Obasanjo Presidential Library, Abeokuta, the Ogun State capital, in his chopper at about 1 pm, was welcomed amidst fanfare by his supporters and members of the party. Visibly, it was a hectic moment for security personnel who were instructed by the management to keep the crowd under check but the caliber and crowd overwhelmed them. The helipad was besieged as the chopper hovered around OOPL to touchdown.

As if that was not enough, while a meeting between Asiwaju Bola Ahmed Tinubu and former President Olusegun Obasanjo was held at the penthouse even some workers abandoned their duty posts to catch a glimpse of “EMILOKAN”. Those who were kept out of the meeting had an opportunity to join the revelry at the expansive Moshood Abiola Stadium, Kuto, where Asiwaju was Special Guest of Honour at the Artisans’ Day celebration.

Well, a popular saying goes that wherever there is a cube of sugar, ants will visit the place. Asiwaju is like the metaphorical sugar whose sweetness drew the attention and affection of the crowd of people that was at the place. For me, the positive attitude of the people that were present through the display of loyalty and happiness speaks volume about the personality of Asiwaju and the acceptance and popularity that Prince Dapo Abiodun enjoys among the party members and residents of Ogun State.

It was a Turkish playwright and novelist, Mehmet Murat ildan, who aptly said, “When you visit a country, visit the forgotten artisans of the narrow streets because they are the ones who made that country! Do this, not to honour them but to honour yourself!,” but it was Asiwaju Bola Ahmed Tinubu who gave life to those meaningful words as he attended the occasion of the 2022 Artisans’ Day in Abeokuta. The symbolism of his solidarity with artisans underscores the respect he has for the downtrodden and the engine room of the society— the artisans.

Across the globe, Artisans’ Day is a special day that is dedicated to the celebration of Artisans. It is also a veritable platform to identify and appreciate the immense values that they have continued to contribute to the development of the economy. To know the importance of artisans is to think about Governments building roads without artisans—the motor mechanics, panel beaters, rewires painters, etc— who would ensure we have road-worthy vehicles that convey humans, goods, and services from one place to another. It would be disastrous. Similarly, we cannot underestimate the contributions of the masons, plumbers, electricians, tillers, and P.O.P. makers to the aesthetics of our houses and estates; the same could be said of the furniture makers who make the piece of beautiful furniture for our homes and offices. There is the African woman who continues to be the most beautiful due to the artistry of our dressmakers and designers and hair stylists.

Incontrovertibly, artisans have continued to preserve our cherished cultural traditions of handmade works. The “tie and dye” (adire/Kampala) makers; cloth weavers; the clay pot makers; the wood carvers; the brass makers, and a host of others needs to be appreciated and celebrated for their contribution to the growth of the economy and the sustenance of our existence. And it is the collective quality of their handiworks that marks one of the reasons that Ogun State takes prominence on the global map of innovation. The world knows Ogun for Adire!

Commendably, these peoples’ craft— artisanship— is a major contributor to a larger percentage of the Gross Domestic Product (GDP) of our Nation. They are a major contributor to the economic agenda of employment generation, poverty alleviation, and food security— a massive employer of labour. Significantly, Asiwaju Bola Ahmed Tinubu has chosen Ogun state as the place to identify and celebrate with this important composition of our nation.

As I have observed, it is worthy to mention that since the inception of Prince Dapo Abiodun’s Administration in May 2019, Ogun State has continued to witness a significant increase in the number of registered Trade Associations and Artisan groups. Presently, the number of Artisan groups and associations has increased to Three Hundred and Fifty-Two (352). And, the symbiotic relationship between the Artisan groups and the Government of Ogun State definitely has direct and indirect impacts on the state’s internal and external economy of scale.

The All Progressive Congress Standard Bearer, Asiwaju Bola Ahmed Tinubu could not contain his wonderment when he expressed, “We are glad with what the governor is doing and we are glad with all the support he is giving,”. He noted that he is proud of the various infrastructural drives of the governor.

Well, to some of us who are dispassionate observers, since his assumption of office as the Governor of Ogun State in May, 2019, Prince Dapo Abiodun has left no one in doubt, including the doubting Thomases, about his prodigious administrative acumen, robust intellect, keen vision, transparent honesty, and the sheer capacity to organise men and materials for outstanding results. In the Nigerian space where public service is largely synonymous with self-service, Prince Dapo Abiodun— who might have his foible as a human— has remained constant as one of the exceptional few who are passionate about their jobs, patriotic to the Nigerian nation, and conscious of the fact that leadership is not a destination but a process that must be meritoriously, duly and conscientiously followed.

Where there is an honour, there is commendation and that is why Asiwaju Bola Ahmed Tinubu and citizens and residents of Ogun State who were present at the Artisans’ Day 2022 in Abeokuta have commended Prince Dapo Abiodun. It is an acknowledgment of his rare display of leadership and delivery of the dividend of democracy to the masses through good governance that is built on human-capital and infrastructural development.