Osun governor-elect, Adeleke to receive APC defectors, others into PDP in Ogun 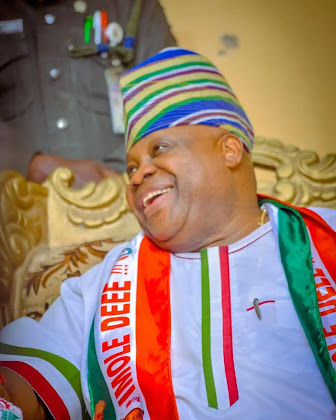 It was learnt that Adeleke would visit Ogun alongside other leaders of the PDP in the Southwest.

It was gathered that the Chairman of the Party in Ogun, Sikirulahi Ogundele, and other executive members are putting arrangements in order to host the Osun governor-elect.

The Publicity Secretary of the PDP, Akinloye Bankole, reliably confirmed this to our correspondent on Wednesday.

According to Bankole, members of different political parties have indicated interest to join the PDP in Ogun.

“The new members in thousands that have shown interest to join the party are from the ruling All Progressives Congress (APC), African Democratic Congress (ADC), Allied People’s Movement (APM) and other political parties across the twentt local governments of Ogun State,” Bankole stated.

He added that notable leaders of each of the various groups joining the PDP would address the meeting on their convictions for choosing the PDP as their choice party.

“The welcome back home reception will also be attended by leaders and members of the party across the state.”