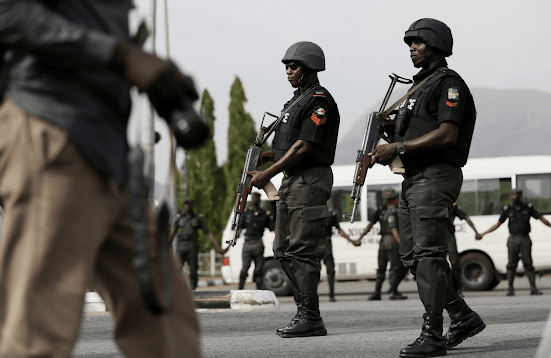 After the sealing, the operatives stationed their armoured tank at the gate to the Secretariat, as well as deployed personnel within the area.

While raiding the Secretariat, the Police arrested the party’s Borno Central Senatorial Candidate for the 2023 general election, Alhaji Attom Magira.

This is even as the NNPP supporters in Borno and the candidates on the party’s platform are preparing to officially receive the presidential candidate and the party leader, Senator Rabiu Musa Kwankwaso in Maiduguri.

Reacting to the development, the NNPP’s governorship candidate, Alhaji Umar Alkali confirmed that the Secretariat was sealed and the Central Senatorial Candidate was arrested and taken to the Police headquarters.

“When we got there, we saw a letter saying that our office is in a residential area. We wondered because some few metres away from our office is an APC office, which has not been sealed.

“We cannot be intimidated by the sealing of our office, we cannot be deterred by this, we are determined to wrestle power from the APC come 2023 general election by the grace of God.

“I was a former APC gubernatorial aspirant, they know my capacity, I left APC because APC in Borno is one man show, he assumed himself the position of God, he decides who becomes a messenger,” he said.

He claimed that the All Progressives Congress is intimidated by the growth of NNPP, saying that they were further rattled that Rabiu Musa Kwankwaso was planning to visit the State.

“The APC is intimidated by the presence of the NNPP in the State, because PDP is an appendage of the APC in Borno State and they believe with the coming of our presidential candidate and party leader, Rabiu Musa Kwankwaso, APC will definitely be intimidated the more,” he said.